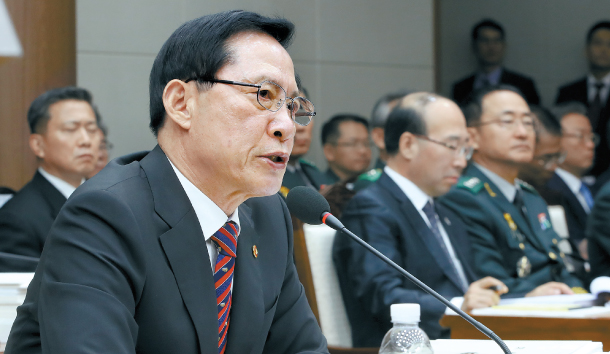 Defense Minister Song Young-moo answers to questions from lawmakers of the National Defense Committee at a parliamentary audit in the Ministry of National Defense in Yongsan District, central Seoul, on Thursday. [YONHAP]

Seoul and Washington will discuss and approve a revised structure of the Korea-U.S. combined forces command at the upcoming security consultations later this month to prepare for the U.S. handover of the wartime operational control of the Korean troops, the Ministry of National Defense said Thursday.

In a report to the Defense Committee of the National Assembly for the routine government inspection, the ministry briefed lawmakers about the plan for a future combined forces command structure, which will replace the Korea-U.S. Combined Forces Command after Korea takes over wartime operational control.

The ministry said it is creating the plan as leaders of Korea and the United States agreed to the early transfer of the wartime operational control.

During their first summit in June, President Moon Jae-in and U.S. President Donald Trump agreed to “continue the alliance’s work to expeditiously enable the conditions-based transfer of wartime operational control.” They also agreed that Korea will continue to acquire the critical military capabilities necessary to defend against the North’s nuclear and missile threats.

Some have speculated that the United States was reluctant to accept the new command structure and that the discussion was not proceeding as planned. The ministry, however, confirmed that it is progressing as scheduled.

Starting next year, drills will take place to check on the smooth operation of the new command structure.

The change will strengthen Moon’s ambition to build a better military to counter growing security threats. In his Armed Forces Day address on Sept. 28, Moon said a South Korean military with its own wartime operational control will be more fearsome to the North, repeating his commitment to bolster the country’s independent defense capabilities and assume command authority from the United States.

Defense Minister Song Young-moo also reiterated the plan before the National Assembly. “We will take over the wartime operational control as soon as possible, based on the right conditions and timing,” Song said. “Based on the two presidents’ agreement, we have pushed forward the plan in consultation with U.S. counterparts. We will win the public consensus to assume the command authority with stability.”

According to sources, the Defense Ministry aims to establish the fundamental basis for the Korean military’s independent defense capabilities under the new combined command structure. The step will require massive investments in arms procurements. Starting 2019, the new combined forces command will control the Korea-U.S. joint military drills to check on the readiness of the Korean military. After a final verification, the wartime operational control is expected to be handed over to Korea in early 2020s, sources said.