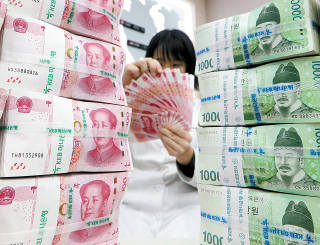 Korea and China announced the extension of a currency swap deal on Friday, defying speculation that the delayed announcement on the deal, which technically expired on Tuesday, may be because negotiations had stalled due to diplomatic tension surrounding Korea’s installment of the Terminal High Altitude Area Defense (Thaad) antimissile system.

The terms of the renewal follow those of the previous arrangement, with the contract set at $56 billion for three years.

Korea’s central bank and the Finance Ministry said that the renewal agreement was made on Oct. 10, the day the previous deal matured, but they delayed the official announcement due to “technical issues.”

“We reached the final agreement on Oct. 10,” said Lee Ju-yeol, Governor of the Bank of Korea.

“We announced the decision today because we’ve completed a review of technical issues.”

Lee and Finance Minister Kim Dong-yeon confirmed the renewal during their visit to Washington for a meeting of the Group of 20 finance ministers and central bank governors and the annual gathering at the International Monetary Fund and the World Bank.

Lee explained that the extension came into effect on Oct. 11.

“Since the decision went into effect on Oct. 11 after the signing of the agreement on Oct. 10, there was no vacant period,” the governor said.

A cross currency swap allows two countries to exchange payments in one currency for an equivalent amount in the other to facilitate bilateral trade transactions and offer liquidity support to financial markets.

Since the arrangement with China accounts for nearly half of the entire $122 billion worth of currency swaps that Korea has with other countries, the government and the central bank have worked to lengthen the deal since the beginning of this year with a series of working-level discussions.

Experts say that China is also incentivized to extend the deal because the currency swap can contribute to China’s efforts to make the yuan a key international currency.

As the expiration date drew nearer, however, some experts predicted the tensions surrounding the Thaad deployment could affect the negotiation.

The successful renegotiation may prove crucial for the Moon Jae-in administration, as it tries to reach a diplomatic breakthrough with China, Korea’s No. 1 trading partner, which has imposed a range of economic retaliations against Korea.

Noh Kyu-duk, a spokesman for the Ministry of Foreign Affairs, told reporters that the government expects the agreement to serve as a watershed moment in the two countries’ cooperation.

“In the wake of the deal’s extension, the government hopes that bilateral relations and cooperation between Korea and China will improve in other sectors,” the spokesperson said.

Both the ruling and opposition parties welcomed the announcement.

Jeong Yong-ki, a spokesperson of the opposition Liberty Korea Party, called the event “a relief,” saying that the Chinese government should be more open to economic matters independently of the political tension.

The two countries began the exchange, worth $26 billion, back in 2009 to avoid a liquidity crisis and facilitate bilateral trading. Both parties agreed to double its size in 2011 and went on to renew the swap deal in 2014 during former President Park Geun-hye’s state visit to China.