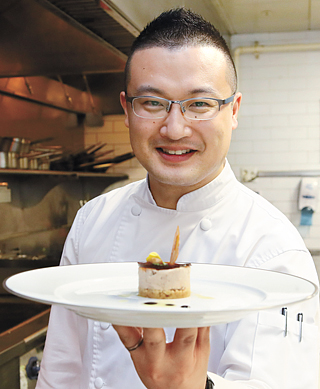 It may seem unusual to have a Frenchman win the domestic round of Hyatt Hotel and Resort’s Good Taste Series 2017, a competition open to Hyatt chefs around the world. However, Chef Damien Selme, 31, won the day and will advance to the regional finals later this month.

Selme, a Korean adoptee, plans to use perilla leaves and sesame seeds, common ingredients in Korean cuisine, to accentuate dishes when he heads to Hong Kong for the Asia Pacific regional final. His favorite dish, however, is gamjatang (pork bone stew) because “it’s an amazing food made with basic ingredients.”

Before Selme leaves for the regional final, the JoongAng Ilbo, an affiliate of the Korea JoongAng Daily, sat down with the top chef at his workplace, the Park Hyatt Busan, on Sept. 18 to learn more about him and his approach to cooking.

Born in 1986 in Korea, Selme was adopted and moved to France when he was only six months old. He has been interested in cooking since a young age, and after completing culinary education in 2004 he initially worked as an intern at La Palme d’Or, a two Michelin star restaurant in the Grand Hyatt Cannes Hotel Martinez. Selme later moved to La Cabro D’or, a one Michelin star restaurant located in Provence, as a chef de partie from 2005 to 2008.

Selme had been studying southern French cuisine at a two Michelin star restaurant, Les Restaurant des Rois, in 2009 when his interest in Korea was sparked after a chance meeting with a Korean intern. “I had this urge within me to learn about Korea, so I requested a two week vacation in December 2009 to travel to Korea,” he said. After traveling to Haeundae Beach in Busan and the Jeonju Hanok Village in North Jeolla, Selme decided to move to Korea.

Despite having no real plan, Selme headed for Pierre Gagnaire a Seoul at the Lotte Hotel Seoul to meet with Gagnaire, a Michelin-star chef. After being offered a chef de partie position at the Korea Furniture Museum, he immediately moved to Korea in January 2010.

Since then, Selme has made a name for himself, cooking at galleries and events, including the 2010 G20 summit in Seoul. He moved to Busan in 2013 with his wife and 3-year-old son, taking a position as a chef at the Park Hyatt Busan.

Selme dreams of operating a Michelin-star restaurant in Korea in the future, where he can combine French culinary methods and Korean ingredients to create new dishes. He believes that Korean cuisine, compared to European dishes, stands apart due to its healthiness. “Being a chef is a stressful job, but it’s worth giving a try if you are fulfilled by the customers who enjoy the creations that you made.”