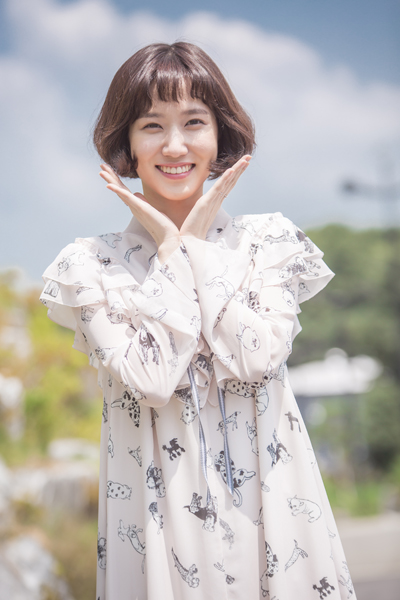 Hit JTBC drama “Age of Youth” recently wrapped its second season. The drama is about five female university students living in a share-house named Belle Epoque. In season two, actress Park Eun-bin’s character Song Ji-won stood out from the rest as the show delved deeper into her story than it had during the first season.

JoongAng Ilbo, an affiliate of Korea JoongAng Daily met Park to discuss her character’s peculiar and lively personality and how she pulled off telling dirty jokes she didn’t know she could say.

Q. Your character was at the center of season two. What was that like for you as an actor?

A. I heard that the writers of the show wanted season two to carry on Ji-won’s unfinished story from the first season and I was very thankful. In the second season, I felt a bit burdened because there were certain roles that I needed to fulfill within the character.

Song Ji-won is a pretty popular character among viewers. How does that make you feel?

I read comments that were posted on videos of funny scenes, and I read phrases like, “I want to smash an apartment because of Park Eun-bin.” At first, I thought it was a negative reaction, but it was actually praise. I am very thankful that they like it so much.

I am grateful for that. I hope that they can be happy in the future because of my role.

Do you have a male friend like Song’s best friend Lim Seong-min?

I don’t have that many friends of the opposite sex. I envy Ji-won - maybe I should make more friends like her.

At the end of the show, Lim Seong-min and Ji-won and didn’t get together, much to the dismay of some of the show’s fans.

I heard that many people expressed their sadness and disappointment when Ji-won didn’t end up with Lim. Since many other stories featuring male and female friends show them becoming a couple, I thought it would be good for this drama to have Ji-won and Seong-min not get together and instead remain friends.

However, later on, Ji-won goes through a tough period and Seong-min always sticks by her side. So, I thought that it would be difficult for Ji-won to find a better man than Seong-min. They have had a strong bond.

If there is another season, I think the two will end up together.

Will there be another season? Season two ended pretty openly.

To be honest, I am not sure. Although I am fond of this drama, season two already felt like a gift to me. I think it will be a miracle if season three comes out.

“Age of Youth” was the first time that Park played a character like Song, who often makes dirty jokes at random times. Through Song, she felt comfortable saying words that she would never say in real life. [SCREEN CAPTURE]

Did playing Ji-won affect your own personality?

It is not that I don’t have Ji-won’s cheerful character, but I overemphasized my cheeriness while playing her. I also absorbed some of her positive aspects. I don’t think it is easy to totally change one’s personality with just a single character.

Do you often make dirty jokes as well?

To be frank, I was sometimes embarrassed while playing Ji-won. It was the first time for me to act like that. Through playing her, I have said words that I would never say in real life. I think some parts of myself that were hidden came out through her.

What was your most memorable scene of the season?

In episode five, there was a scene that was narrated. I really liked when the song that played in the background, “On a Day Like This” from the band Drain. The scene when the grown-up Ji-won faces her childhood self was very poetic. During that scene I thought, “Finally she can face her memories.”

What did you learn through “Age of Youth?”

I examined my behavior and contemplated how I may have hurt others, mentally. I will especially remember the sentence, “A person doesn’t remember hurting others, but they remember if others hurt them.”

What is your next piece?

I am still thinking about what to choose. I will try hard to make sure I find another character that suits me. From when I was younger, I always wanted to be in a romantic comedy.

I wish. I want to date a man who really likes me and cares for me. I am fine with celebrities or actors as well, but I think it is a bit embarrassing to be in a relationship that everybody knows about.

Do you have anything to say to fans of the show?

I believe Song Ji-won will be well. She became determined to live to the fullest. She’ll be a very ordinary person, yet thankful for everything. I hope the audience doesn’t worry too much about her. It isn’t over until it’s actually done. I hope that everyone lives happily ever after.