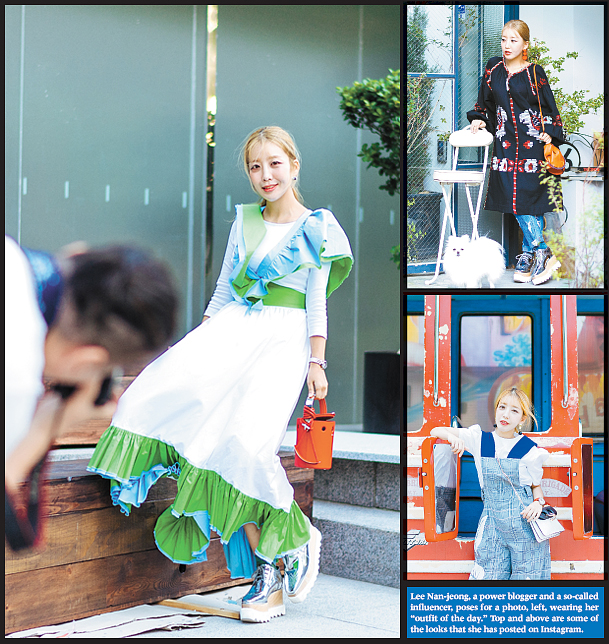 Lee Nan-jeong, 33, usually begins her day at 8 a.m. She gets up and heads straight out the door to take a personal pilates lesson in the neighborhood. After returning home, she takes a shower, goes through her daily make-up routine and puts on her carefully selected outfit to suit the events she will attend that day.

On a recent Friday, the first event she attended was the opening of a concept store from the Japanese shoe and apparel brand Onisuka Tiger, close to her home in Garosu-gil in Sinsa-dong, southern Seoul, which began at 11 a.m. Straight after the event, she rushed to a Marc Jacobs’ preview showcasing the upcoming Fall/Winter styles at the Galleria department store down the road in Apgujeong-dong.

Even though the event took place at lunch time, Lee didn’t have time to eat because she had to be at a showcase for skincare brand Dr.Jart+’s back in Garosu-gil. After dropping off the goodie bags she got from the two previous events at her house, she quickly stopped by a nearby cafe for a coffee to freshen up, but takes it to-go so she can drink while walking to another event for cosmetic brand Nu Skin.

Then, without time for dinner, she hopped over to Puma’s grand reopening back in Apgujeong-dong. By the time she got home, it was nearly 11 p.m. After washing up and getting into comfortable clothes, Lee sat in front of her computer to upload posts from her day on her Instagram and her blog on Naver. At around 3 a.m. she goes to bed, just in time to get five hours of sleep.

Lee is a full-time fashion blogger and a so-called influencer, who gets paid for uploading photographs of her #ootd, or “Outfit of the Day,” and details of the fashion and beauty events she attends.

Originally a marketing term, the word “influencer” became popular in Korea a year ago. It refers to people, mostly non-celebrities, who “influence” others through their personal social media outlets, such as Instagram, Facebook or blogs. They are similar to celebrities in their way of influencing their followers on which kind of bags they carry or cars they drive, for instance, but the major difference would be that the influencers are closer to the public.

“People send me direct messages on Instagram and leave comments below my posts asking questions like where I purchased the dress I’m wearing, when that bag will be launched in Seoul or whether the shoes I’m wearing are comfortable enough to walk in,” said Lee. “It takes time but I reply to those questions as much as I can because that’s the whole reason for doing what I do as a profession.”

Lee didn’t plan to become an influential blogger, or an influencer.

She says her passion for fashion, topped with the enthusiasm she has in revealing herself to the public - by uploading endless photographs of herself on all of her social media accounts - naturally led her to be able to make money for doing what she’s been doing for the past decade.

To learn more about the life of a successful influencer, the Korea JoongAng Daily interviewed Lee late last month at a hip restaurant suggested by Lee in her neighborhood in Garosu-gil. The following are edited excerpts from the interview.

Top: Lee has about 191,000 followers on her Instagram. Above: An Instagram post she uploaded after attending a cosmetics event by Dior. Her posts get an average of 3,000 likes. [SCREEN CAPTURE]

Q. How did you become an influencer?

A. I majored in fashion and before operating my personal blog, I ran an online shop selling select fashion items for seven years. So I already had some frequent customers. But even before that, before Facebook penetrated the world, almost all young Koreans operated a mini homepage on Cyworld [the moribund social network platform that was immensely popular among Koreans in the 2000s] and also there was an online site called Musinsa, where stylish people uploaded their own photographs of what they wore that day. By being active on these sites, I already had some fans.

Then came Facebook and Instagram, so I naturally moved on to those platforms and the fans also followed. Since the latest social networking sites were so viral, I began to see more and more people following me, so I started a blog on Naver around 2010, uploading photographs of my daily looks. Because I don’t wear only expensive items, but mix and match fashion items that are also affordable, I think people really took notice of me and my content. They said things like, “Oh, I didn’t know Zara had that kind of sweater,” or “Oh, I have that skirt too and I’ll try to style it like you. It gives you a totally different look.”

At one point, I began to get calls from fashion brands asking if I would be interested in their products and help them promote it. After realizing it’s difficult juggling two things at once, I decided to just concentrate on being a professional blogger while I have the followers and shut down my online store.

I heard some professional influencers even hire their own photographers who follow them along to take professional pictures and paparazzi shots. Do you have one?

Yes. My husband used to do that for me whenever he had free time. But since he works during the week, he couldn’t really be there with me all the time so I decided to hire a professional photographer. He takes my outfit of the day looks and also comes to the events with me so he can take pictures of me with the products.

Usually, other bloggers simply take pictures with of the products with their phone, but I don’t. For me, I have to be in those photographs to prove that I really was there and experienced the brand.

How do professional influencers make money?

If this restaurant wanted to promote this pasta through an influencer, they’ll contact me and invite me to eat here. I’ll be taking pictures, and writing about it on my blog. Then they would pay you after the work is done. Of course, the pay varies depending on how influential you are.

But I only write about the brands that I like. We are not critics so we can’t write bad reviews but we can chose not to write about it. For example, I get a lot of offers from fashion brands asking if I could wear one of their products, but I reject those that I’m not fond of. I only accept ones that I like, and that way, I was able to gain trust from my readers.

You must have a big wardrobe for all your clothes, shoes and bags, right?

Oh yes. My house has three rooms and the biggest one, which should’ve been a bedroom for me and my husband, is a closet. All four sides have been installed with hangers so they are fully occupied now. That room became somewhat crowded so I’ve been turning the living room into my closet as well. I just can’t throw out my old clothes so my things just build up every day.

Do you think it can be a career that you keep for a long time?

Yes. I believe I can continue being an influencer, but I only want to work until I am 40.

Until recently, many people around me have been telling me that I should start my own brand when I have such large number of followers since I won’t be able to work as an influencer forever, and that really got me thinking a lot. Then a close Korean fashion designer friend of mine named Choi Hye-jin told me that she wishes there were more people like me in Korea.

Actually, many of the clothes I wear are local fashion brands made by young Korean designers who need just a little bit of help to make a name for themselves. I wear their clothes for no price, because I simply like them and I own many of them. That kind of helped the designers a lot, they tell me. So I think that’s what I’ll continue to do, find the hidden jewels that need my influence and help them throughout my work.

You recently won the influencer award in Malaysia. How did that happen?

It was from Influence Asia 2017, which honors individuals or groups in the social media influence industry across Asia. They select top influencers in seven different Asian countries in different categories like fashion, beauty, food, YouTube and so on.

I became the top influencer for Korea’s fashion category, which was an honor. I didn’t apply for it or anything. I just got an email from a Korean sponsor of the event saying that I should go to Malaysia. I just went as an experience, without thinking that I would win, but I did and that was a surprise.

Many young people want to become an influencer like you. Do you have any words of advice for them?

You have to be really, really diligent and patient if you want to become an influencer and earn enough money to call this a profession. You won’t achieve it within just few months. I am where I am now because I have such a vast portfolio. You also have to have something unique that stands out above all the others.

For me, that is high-quality photographs and writing that has been really thought through. When I used to blog for fun, I just wrote posts like a diary. It took me less than an hour. But now, it takes me nearly three hours per post. Even for Instagram, adjusting photographs, the size and inserting hashtags and all that means it takes about an hour to upload one post. You really need to put a lot of effort.

Another distinctive characteristic I have as an influencer is that I am not afraid to use colors, so those who really want their individuality to shine seem to like my look a lot. I also try to aim global. About 30 percent of my work comes from overseas and I think they are starting to take notice as well.

Recently, I took a trip to London for a vacation. Of course I posted my daily looks on Instagram and my whereabouts. Then Vivienne Westwood Korea contacted me saying that the Vivienne Westwood headquarters in London wanted to get in touch with me. Apparently, they checked my Instagram and saw that I was in London, realized that they saw me during an event in Seoul, and they invited me while I was there.