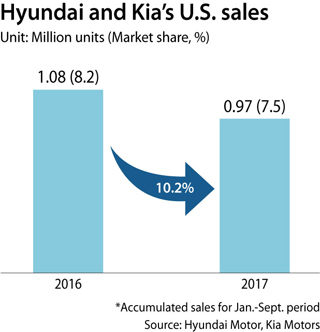 Hyundai Motor and its sister company Kia Motors are suffering in the United States, a market that the Korean carmakers initially struggled to enter three decades ago and where they have since had to overcome a range of issues including a quality control problem.

The two automakers’ market share in the United States, their second biggest market after China, hit an eight-year low in the first nine months of this year, according to a sales report.

Hyundai and Kia, which together form the world’s No. 5 carmaker, accounted for 7.5 percent of the U.S. automotive market during the nine months of the year. Last year, their market share was 8.2 percent during the same period.

This year’s market share is the Korean automakers’ lowest since 2009, when their portion of the U.S. automotive market was only 7 percent.

“Hyundai and Kia’s models currently being sold in the U.S. are quite old,” said a Hyundai Motor official. “Hyundai Motor hardly has any new models launched in the U.S. this year. Things will get better when the Kona and Genesis G70 launch early next year,” the official added.

The compact sedan Elantra, known as the Avante domestically, was the most popular model in the United States last month, selling 14,401 units, followed by the SUV models Santa Fe and Tucson, which sold 11,420 and 10,118 units respectively.

Premium label Genesis sold 1,369 units of its latest G80 model last month, and only three Genesis Coupes were sold. The rapid rise in SUV popularity in the United states has also played a major role in the drop in sales for Hyundai Motor, which is largely focused on a sedan lineup.