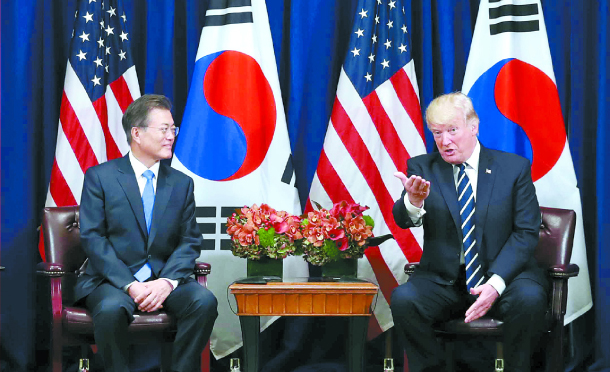 President Moon Jae-in, left, and U.S. President Donald Trump hold a summit last month in New York on the sidelines of the UN General Assembly. They will meet again next month in Seoul. [JOINT PRESS CORPS]

U.S. President Donald Trump will embark next month on his first Asia trip since becoming president, during which he will have summits with President Moon Jae-in as well as Japanese Prime Minister Shinzo Abe and Chinese President Xi Jinping.

According to the White House, Trump will travel to Japan, South Korea, China, Vietnam, the Philippines and Hawaii from Nov. 3 to 14. His bilateral and multilateral engagements “will strengthen the international resolve to confront the North Korean threat and ensure the complete, verifiable, and irreversible denuclearization of the Korean Peninsula,” the White House said. He will also “emphasize the importance of fair and reciprocal economic ties with America’s trade partners.”

Trump’s visit to China is expected by some to change its attitude toward the North, as Beijing has resisted the international community’s plan to exert harsher pressure on Pyongyang. An oil embargo was not adopted at the United Nations because of China’s protest. But the Moon administration hopes to see some change in Beijing’s attitude after the country holds its Communist Party national congress on Wednesday.

“China has repeatedly said it cannot make a radical change in handling the North until the leadership is stabilized for Xi’s second five-year term,” said a senior source close to the Moon administration. “Because Trump is making a strong push for China’s role, after the party congress it will be hard for Beijing to continue being lukewarm when it comes to the international community’s demands.”

During Trump’s visit to Korea, Seoul and Washington are expected to have more specific discussions concerning the U.S. strategic assets’ rotational deployment to the Korean Peninsula, following Trump and Moon’s agreement during their summit in September in New York.

The U.S. Navy Los Angeles-class attack submarine USS Tucson made a port call at the U.S. naval base in Jinhae, located on the southeast tip of the Korean Peninsula, on Oct. 7, as part of its deployment to the region, according to the U.S. Pacific Command. The nuclear-powered submarine, armed with Tomahawk cruise missiles, is considered one of the stealthiest and most advanced submarines in the world, according to the U.S. Navy. The USS Michigan also arrived in Busan, while the USS Ronald Reagan is set to come to the peninsula.

“If the upcoming summit produces a specific agreement on Moon’s ambition to build nuclear-powered submarines, we will take a higher strategic ground over the North,” a key official of the administration said. “Because we discussed the matter for a long time, we expect to see a tangible outcome.”

Seoul and Washington have also agreed to the revision of the Korea-U.S. free trade agreement and will likely address the matter during their meeting. Trump’s first destination on his Asia tour is Japan. Japanese media reported that Trump will start the trip on Nov. 4 and stay there for three or four days. Taking into account Moon’s plan to visit Indonesia on Nov. 8, the Korea-U.S. summit is expected to take place on Nov. 6 or 7. If too brief, the U.S. president’s trip may prompt criticism toward the Moon administration if Seoul is seen as having been treated as unimportant.

“We do have concerns regarding Trump’s itinerary,” said a key Blue House official. “We are preparing for a summit that will be the most effective and symbolic as a direct concerned party of the nuclear crisis.”

During a 2012 visit, then-U.S. President Barack Obama visited the demilitarized zone and met with U.S. troops at the UN Command at Panmunjeom. He also met with South Korean troops and received a briefing at Observation Post Ouellette.

Foreign Minister Kang Kyung-wha and U.S. State Secretary Rex Tillerson discussed the upcoming summit by phone on Saturday. Tillerson said that he expects the visit to focus on building mutual trust and solidarity.