Kosdaq is rife with short-selling

Kosdaq is rife with short-selling 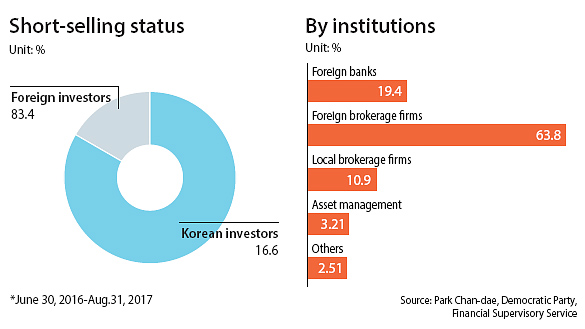 During a shareholders meeting on Sept. 29 the pharmaceutical company Celltrion’s founder and chairman Seo Jung-min told shareholders that it was time to end the fight against short-selling.

The company was has constantly seen its share value rise and fall due to short-selling. In 2012, the company suffered due to a malicious rumor that two people died during the testing of a new drug in China.

The rumors weren’t true but the company’s shares suffered, resulting in losses for its minority shareholders. The investors, who couldn’t tolerate the losses from short-selling, proposed moving the company’s stock to the bigger Kospi in July. If everything goes to plan, Celltrion’s stocks will be traded on the primary market in February next year.

Short-selling is an investment practice where an investor borrows shares from financial institutions like brokerage firms that are immediately sold off on the assumption that their value will decline and they can be repurchased at a lower price.

The debate over short-selling has been going on for years with those in favor arguing that the investment practice helps increase liquidity in the stock market whereas those that oppose it argue that it is profiteering using undisclosed information.

Locally, short-selling is more severe in the tech-heavy Kosdaq, led by foreign investors.

According to a recent report by Democratic Party lawmaker Park Chan-dae, based on data provided by the Financial Supervisory Service on short-selling between June 2016 and August this year, foreigners accounted for 83 percent of the short-selling on the Kosdaq, which is higher than the 58 percent on the Kospi.

The lawmaker claimed that Morgan Stanley was the biggest practitioner of short-selling on the Kosdaq, followed by Credit Suisse and Merrill Lynch.

These financial institutions are, however, only brokers and not the person placing the orders.

“We don’t know who is actually placing the orders,” said an official in the local financial investment industry, who requested anonymity. “However, many are believed to be Asian investors managing investments in Hong Kong and Singapore and we believe they are placing short-selling orders based on internal information.”

One of the reasons foreign investors are thought to be behind the bulk of the short-selling is because the practice is heavily frowned upon in Korea.

“With the market uncertainties including the nuclear threat from North Korea and the Thaad retaliation from China, we need to consider additional measures against short-selling on the Kosdaq,” said Park.

The government introduced tougher regulations on short-selling last month, including suspending short-selling transactions if the practice exceeds 12 percent of the stocks traded on the Kosdaq or 18 percent of those on the Kospi. Rapid drops or sharp increases will also cause suspension.

A share on the Kosdaq will be labeled “overheated” when the transaction amount on short-selling increases more than five times and short-selling accounted for more than 5 percent of trades in the last 40 days.

“Since the government toughened the regulations on short-selling there have already been 13 shares that were labeled overheated,” said Choi Chang-gyu, head of NH Investment & Securities’ alpha strategy team. “Seven of those that were limited on short-selling were able to see a positive increase.”

“When compared to other countries the level of penalty on unfair trading is relatively weak,” said Lee Hyo-sup, Korea Capital Market Institute analyst.