Interest rates on mortgages start to creep up

Interest rates on mortgages start to creep up 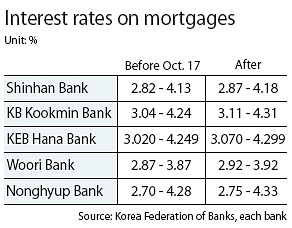 The move will affect both existing and new borrowers of adjustable rate mortgages, making Korea’s mountain of household debt more costly to service.

Shinhan Bank, KB Kookmin Bank and Woori Bank pushed up the interest rate on mortgages between 0.02 percent and 0.05 percent following a rise in the Cost of Funds Index (Cofix).

Interest on adjustable-rate loans are based on the Cofix along with spreads set by banks. Borrowers can choose from two Cofix rate options based on either the banks’ outstanding balances or monthly acquired new funds.

The Korea Federation of Banks, a lobbying group for local banks, said the yardstick for outstanding balances has grown from 1.59 percent to 1.61 percent while that for new funds rose from 1.47 to 1.52.

Many are expecting the U.S. Federal Reserve to raise interest rates in December.

“The Cofix rates, especially the one for new funds, are sensitive to moves in market interest rates,” a source at the federation said.

The Federal Reserve Bank raised its benchmark interest range to between 1 percent and 1.25 percent in June from the previous range of 0.75 percent and 1 percent.

The Bank of Korea has held its key rate unchanged at a record low of 1.25 percent since June 2016.

KB Kookmin Bank raised interest rate ranges on adjustable-rate loans by 0.07 percent to between 3.11 percent and 4.31 percent from 3.04 percent to 4.24 percent on Friday.

Analysts say the Bank of Korea is now pressured to hike interest rates to prevent a capital exodus that could come from the rate gap between other major economies.

The Bank of Korea’s rate decision will take place on Oct. 19, though the market expects a freeze for the rest of the year and a potential rise early next year.