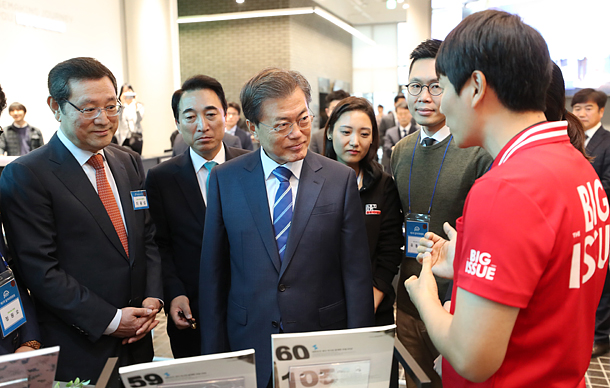 President Moon Jae-in, third from left, talks to representatives of companies at Heyground, a cooperative working space for start-ups in Seongsu-dong, eastern Seoul, before the Presidential Committee on Job Creation meeting on Wednesday. Moon laid out a five-year road map for job creation during the meeting, according to the committee, which included 810,000 new jobs in the public sector, a Moon campaign pledge. [YONHAP]

President Moon Jae-in laid out a five-year road map for job creation that not only promises additional jobs in the private sector through innovative start-ups and social enterprises but also creates 810,000 jobs in the public sector, as promised on the campaign trail.

His is the first government to introduce a five-year blueprint exclusively concentrating on jobs, according to the Presidential Committee on Job Creation.

Although previous administrations have introduced policies to create jobs through technology and start-ups and help small and medium-sized companies, this was the first time social enterprises have been concentrated on in terms of jobs.

The road map was introduced after Moon chaired a Presidential Committee on Job Creation meeting at Heyground, a cooperative working space for start-ups in Seongsu-dong, eastern Seoul, on Wednesday.

The road map has five major categories: setting up job infrastructure, which will include strengthening the job safety net and developing innovative labor resources; creating jobs in the public sector; creating jobs in the private sector through innovative start-ups and social enterprises; improving job conditions (such as putting preference on salaried rather than contract jobs); and supporting the creation of jobs for specific groups - the young, women and senior citizens.

For the private sector, the government is stepping up support for start-ups, mainly ending a loan guarantee requirement for owners of start-ups.

Banks commonly demand the founder of a start-up to guarantee loans taken out for the company. This is a major factor in discouraging entrepreneurs who fail from trying their luck a second time.

The banning of such loan guarantee requirements will start with government financial institutions next year.

The survival rate of Korean start-ups in their first five years is at 27.3 percent, while Germany’s rate is 41 percent and for British start-ups it is 37.5 percent.

The government is concentrating on social enterprises to contribute to job creation for the first time.

These are companies that are more concerned with social responsibility than profits.

One such company that Moon met on Wednesday was the magazine Big Issue, that is run by formerly homeless people.

The government believes that social enterprises will not only contribute to increasing jobs but also raise the quality of job environments, including offering better welfare benefits to their employees.

“Recently, the social economy’s importance has become a means of solving issues such as job insecurity, social gaps and our aging population,” said Lee Yong-seop, vice chair of the job committee. “[Social enterprises] create quality jobs as their profits are shared among employees.”

The long-term goal is raising the job contribution of social enterprises from today’s 1.4 percent to 6.5 percent as in the European Union.

“Currently there are 370,000 jobs in social enterprises,” said Woo Beom-ki, head of the Finance Ministry’s Future Strategy Division. “If we reach the EU’s level, jobs could reach 1.67 million.”

The Finance Ministry, however, said raising social enterprises to that level is a long-term plan that may not be reached within the Moon administration’s term.

The government will be creating a 100 billion won ($88.4 million) fund for social enterprises dubbed “social venture” by 2022 while also expanding government-backed guarantees on loans to 500 billion won in the next five years.

“Under the current system, it’s difficult to guarantee loans for social enterprises, since they are extremely small,” said Finance Ministry official Woo.

He also noted that there’s a misunderstanding that these businesses often go bankrupt.

During the meeting, Moon stressed that he would keep his campaign promise of adding 810,000 jobs in the public sector.

According to his plan, the ratio of contract workers in the public sector will be lowered from the current 19.5 percent to 9.1 percent by the end of his term in 2022.

The remaining jobs will be salaried with benefits.