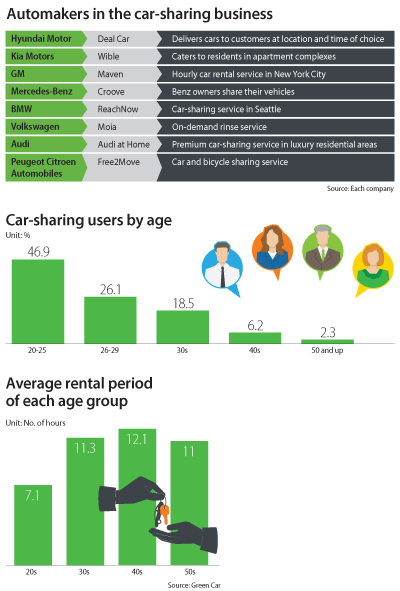 Korean automakers are jumping into the car-sharing business as the sector is quickly becoming a major part of the country’s auto industry.

Hyundai Motor, Korea’s largest automaker, began a free two-month test-drive event for the Kona, the company’s first small-sized sport utility vehicle, on Tuesday. A notable aspect of the promotion is the company’s partnership with Green Car, the country’s second-largest car-sharing service where users can rent a vehicle by the hour through a mobile app. Customers interested in a test drive can sign up on the app.

Last month, Hyundai Motor launched a car-sharing service of its own called “Deal Car” that sends vehicles to drivers at the time and location of their choice. Kia Motors, Hyundai’s affiliate, has a similar service called “Wible” that has cars placed inside apartment complexes for residents to rent.

Other automakers around the world have launched their own car-sharing services. Mercedes-Benz, a German luxury carmaker, began operating Croove in major German cities, including Munich and Berlin, in April. Croove is a car-sharing platform that connects users with Benz vehicles owned by individuals. The German carmaker launched a pilot service in Munich last December. 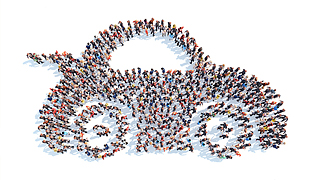 Other companies with different forms of car-sharing platforms include Volkswagen and Audi, as well as BMW, GM and Peugeot Citroen Automobiles.

Car-sharing has often been seen as a business model that could deal a major blow to auto manufacturers, because it allows consumers to use cars on demand without having to purchase them.

A study conducted by Micromill Embrain, a Korean research firm, showed that 49.3 percent of 1,000 surveyed drivers said they used car-sharing services because they reduced the cost of actually buying vehicles.

“Compared to others, those in their 20s and 30s are relatively less approving of Hyundai and Kia,” said Han Jang-hyun, a professor of automobiles at Daeduk University. The two companies’ attempt to expand into car sharing, he said, is a scheme to appeal to younger age groups.

The quality of their vehicles is likely to be a game changer in turning around negative sentiment. Users of car-sharing services who are unsatisfied with a certain brand are likely to exclude the brand when they consider buying a vehicle of their own. Hyundai and Kia are going into the game confident about the quality and cost-effectiveness of their cars.

“Through the Kona test-drive event, [drivers] will be able to realize that Hyundai vehicles are very well made,” a company spokesperson said.

In addition to appealing to potential buyers, Hyundai hopes to gauge market feedback and incorporate it into recommendations for improvements to the Kona.

“Hyundai must have felt a sense of crisis in the domestic market as a growing number of younger customers prefer foreign brands over domestic brands,” a source in the auto industry said.

Industry data shows that Hyundai Motor Group’s domestic market share has been stuck at around 60 percent in the past four years, down from 71.4 percent in 2013, with foreign automakers introducing vehicles like the BMW Mini Cooper with a price tag starting below 30 million won ($26,500).

Some experts say that car-sharing businesses themselves are becoming key clients for automakers like Hyundai and Kia.

According to the companies’ Global Business Intelligence Center, the Korean car-sharing market is expected to grow to nearly 200 billion won this year from 100 billion won last year. This rising demand for car sharing means service providers will have to purchase more vehicles.

“The number of vehicle registration is on the rise to 22 million,” said Kim Pil-soo, an automotive engineering professor at Daelim University. “Given their growth potential, automakers can no longer disregard car-sharing companies.”