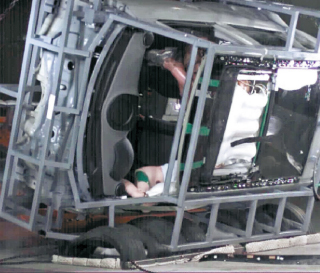 Hyundai Mobis, Korea’s biggest supplier of auto parts, has developed an airbag for panoramic sunroofs to address the risk of passengers getting ejected through the roof during accidents.

The company said in a press release Wednesday that the airbag system is the first of its kind in the world.

“Hyundai Mobis was able to secure the technology necessary for mass production after completing reliability tests,” the statement said, “including a field test, heat resistance test and vibration resistance test.

“There is no precedent globally at the moment for applying panoramic sunroof airbags on vehicles yet,” Hyundai Mobis said.

A panoramic sunroof is a multi-panel glass roof that often covers the entire top of a vehicle. The large operable openings offer a wider view for passengers and are often found in sport utility vehicles, though more automakers have also been offering the option for sedans.

One problem with sunroofs is that they can increase the risk of injury in car crashes. In August, a driver in Detroit was killed when the vehicle rolled over in an accident and he was partially ejected through the sunroof, according to police.

“According to data from the United States’ National Highway Traffic Safety Administration, about 260 people were ejected through sunroofs from 2002 to 2015 in rollover crashes,” Hyundai Mobis said. “A passenger can sustain serious damage to certain body parts like the head and neck when ejected out of a car without safeguards like airbags in place.”

Sunroof airbags have a more complex structure in comparison to regular airbags, a company spokesperson said. Hyundai Mobis said it has applied for 11 patents related to the product.

“Airbag modules for sunroofs must be able to cover a larger area than front airbag modules,” the spokesperson said. “One of the technological difficulties was having the airbag go off and cover the entire sunroof.”