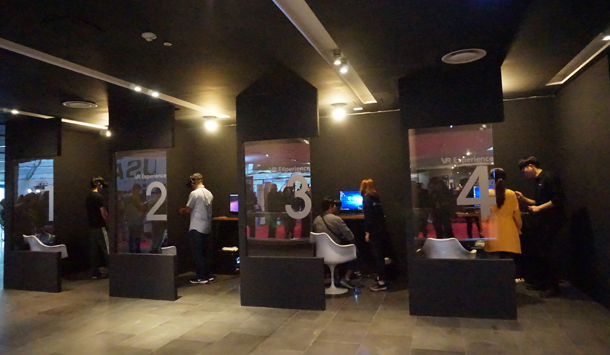 Over the 10-day film festival, slated to wrap on Saturday, BIFF will screen 36 VR films, ranging from narrative fiction and animation to documentaries. The VR titles, which are being screened in various forms such as 360-degree, interactive and experiential VR, have been well-received by the festival attendants.

Interest in VR films has been high at BIFF, and on Sunday afternoon, the wait to see a single film was longer than an hour.

Some of the festival’s most popular VR movies have been director Eugene Chung’s 16-minute “Arden’s Wake: The Prologue” and Eric Darnell’s 4-minute animated film “Asteroid!”

“Arden’s Wake” centers on a young woman and her father living in a lighthouse in a post-apocalyptic world. The woman, who has been forbidden to go into the sea by her father after almost drowning as a child, decides to embark on a journey across the ocean in the wake of her father’s death. The film won the Best Virtual Reality Award at the 74th Venice Film Festival.

Presented by “Madagascar” (2005) director Eric Darnell, “Asteroids!” takes the audience on a space mission that involves attacks by space bugs moving swiftly towards asteroids. The short animation is an interactive movie that guides viewers to interact with the characters with a controller in each hand. Similar to a video game, the VR film provides an immersive experience that allows viewers to zoom in and out with the controllers in their hands, which, through the VR headset, look like the arms of a robot.

BIFF also held VR conferences, where experts and industry insiders discussed the prospects of the technology and its future in filmmaking. Six speakers, including Lee Seung-moo, professor at Korea National University of Arts and producer Kane Lee from Baobab Studios which was behind “Asteroids!” presented at the conference.

BIFF, which has become Asia’s biggest film festival, is the first movie festival in Korea to host a VR cinema.