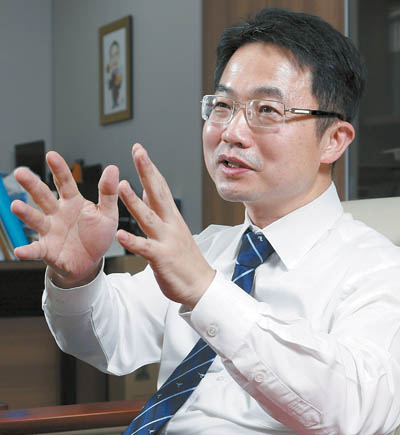 Judge Cheon Jong-ho was born in a slum in Busan, the fourth among seven siblings. After attending a provincial law school, he passed the bar exam on his sixth try. While he mused about making a fortune by opening a law office once, Cheon’s life changed when he took work at a juvenile court.

Dedicating himself to the juvenile court for eight years, he has established a youth rehabilitation center (the so-called “judicial community residence program”). The JoongAng Ilbo, an affiliate of the Korea JoongAng Daily, interviewed Senior Judge Cheon of Busan Family Court last Wednesday in his office.

Q. What is the reason for the increasingly violent nature of juvenile crimes?

A. The things we were warned of before have now surfaced. School violence became an issue when a student, who was bullied in the same school, committed suicide in December 2011. The next year, we saw the suicides of about 10 students.

Crimes in 2012 were characterized by bullying, coercion and insults. On the other hand, a middle school girl student in Busan was severely beaten by other students who attend an alternative school. The victim had to take a two-month leave of absence to recover from the wounds. That wasn’t a case of minor pestering, but cruel violence.

The household has been dissolved and there is no supervising system in our schools. Even adults who passed by did not restrain the assault. In conclusion, the violence outside schools is the problem. The household, the school and society are indirectly intertwined.

Why did violence spread outside schools?

After 2012, schools cracked down on violence, so while violence within school has reduced, violence outside school has increased.

What are the biggest causes?

The dissolution of the household. Children who leave the house are not runaways. They’re called escapees. Domestically abused children have only a few choices. As an elementary student, they don’t realize that they are being abused. After the case of a stepmother’s abuse in Ulsan, authorities did a far-flung investigation on missing children. That brought down child abuse just a bit. But it’s temporary.

What are your thoughts on possible solutions?

This Chuseok (the Korean harvest festival), I climbed up Mount Geumjeong with five female students of a youth recovery center. One student yelled deafeningly, as others passed by watching her. I told her not to. There was even a child who clogged up the toilet by filling it with toilet paper. These behaviors are caused by psychology, but also a lack of education. We passed the Character Education Promotion Act, but this is not something schools can teach. If the household cannot do anything, school education is a waste.

Why do these things keep happening?

I work as the head of the advisory panel for Unicef Korea’s “child-friendly jurisdiction.” The recent incident where a Korean judge left a child in a car in Guam shows the level of concern our society possesses toward children. The pair of legal professionals, these parents, should have played a leading role in this issue. We need to be more sensitive toward everyday child abuse and domestic violence.

Rather than reacting to grotesque cases, we need to prepare for the small cases that happen in everyday life to prevent it from developing into a bigger case. Penalize the crime, but afterward, these people need to return to society as functioning members, and for that to happen, the household, the school and society need to help them stand on their own.

Some are calling for the repeal of the Juvenile Act. Do you believe this to be too extreme?

Yes. There are too many side effects. Rather than repeal, I believe that it is better to raise the severity of sentencing even to those younger than 14, just as Japan did 20 years ago. Grotesque cases are less than five percent. If the Juvenile Act were to be repealed, the remaining 95 percent of cases will be punished by criminal law. This will likely create more ex-cons. We would have to make a 13-year-old stand in court and call his or her friends as witnesses for questioning.

The Public Official Election Act, Civil Act, the definition of juveniles under the Juvenile Protection Act, all have to be amended. This is a problem that needs to be examined on every level of the entire legal system. Currently, minors under 14 can serve up to two years. There are only three types of punishment — two years, six months or one month. Judges have little to no discretion over this matter.

Why did the punishment limit change?

We used to have no limit prior to 2008, but things changed for the worse when it was called a violation of human rights. Since then, the overflow in juvenile reform has become a problem. There needs to be at least 20 to 30 reformatories, but Korea only has 10. Japan has 50 and even those are at 120 percent capacity, meaning that they are overflowing. Experts point out that correction effectiveness is achieved best at 70 percent capacity. Even if juvenile offenders were harshly penalized, the current situation makes it difficult.

So what did the youth rehabilitation center achieve?

According to the stats I looked up while working in Changwon District Court, 70 percent of juvenile cases came from low-income dysfunctional families. If there is no anchoring done in households and friction arises from school, things are pushed outside the school environment.

Now, 95 percent of these children do wrong. Many of them can be saved. But since we cannot enforce household harmony, we founded youth rehabilitation centers in November 2011 for the purpose of character education and the reestablishment of familial and societal bonds. Now there are 19 centers.

They are, in terms of accommodation, roughly equal to two minimally occupied juvenile reformatories. This reduces a lot of the social cost. Something miraculous happened this Chuseok, when all the custodial children of the 19 centers returned after 10 days of holiday. The kids that spent 6 months in this program have a recidivism rate of zero. The job transfer rate, compared to juvenile offenders in juvenile reformatory, is also much lower.

What are some difficulties?

The center is run with self-funding, thanks to an enthusiastic retiree couple from the Navy who renovated houses and shops. The judiciary only funds 500,000 won ($442) a child per month. Germany’s HEIM, a support center that practices residential care, receives annually between 78 and 96 million won. Ones in Japan receive annually 76 million won on average.

But a year ago, with an amendment to the Juvenile Welfare Support Act, the youth rehabilitation centers became official juvenile welfare facilities. If budgets are allocated, there will be many across the country to do this work. However, the government is not funding us.

What is your thought on juvenile offenders?

Compare human society to a forest in nature. To help saplings grow into gigantic trees, we thin out the forest. But humans cannot be thinned out like that. Even death sentences were not carried out for 20 years. Eventually, we have to coexist. To make my child happy, there must be a plenty of good neighbors nearby. Juvenile offenders are my child’s neighbors and our future.

Is it true that you applied to be a judge of the juvenile court?

I very much wanted the position. Apparently, there was no previous example of a judge manning this position for eight years. The Supreme Court opened up a personnel committee to permit that.

What kind of childhood did you have?

I grew up in Ami-dong in Seo District, Busan. It was a shantytown that had been set up by refugees from the Korean War. I was the eldest son. All nine of us family members lived in a single room.

Even now, that house is located on the mountain slope. I was the only one of my siblings to obtain a higher level of education. Studying was the only thing I could do. I dreamed of becoming a judge ever since my elementary years.