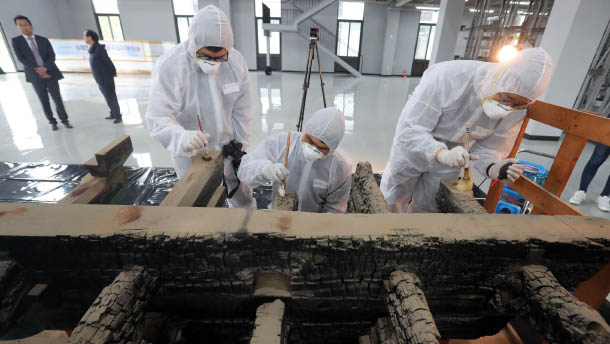 Officials of the Cultural Heritage Administration dust off the damaged wooden structure of the Sungnyemun, destroyed by arson in February 2008, when it arrived Wednesday at the Paju Traditional Architecture Material Preservation Center in Gyeonggi from a temporary storehouse inside the Gyeongbok Palace, central Seoul. According to the administration, about 3,500 damaged materials will be carefully transported over the course of a month from Wednesday, using three five-ton trucks that are resistant to vibration. The architectural remnants of Korea’s National Treasure No. 1 will be securely stored in the center, operated by the Korea Foundation for the Traditional Architecture and Technology, while its officials look for ways to use them in the future to educate Koreans on the importance of preserving Korea’s cultural heritage. [YONHAP]