The debate has just begun

The debate has just begun 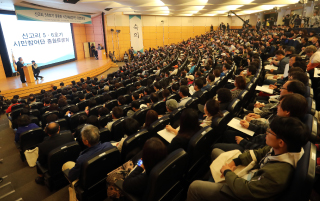 A group of civilians listen to explanations by the host of a committee to canvas public opinion on the government’s plan to stop construction of two nuclear reactors, the Shin Kori 5 and 6. [YONHAP]

Cho Sung-jin, a professor of energy science at Kyungsung University, cannot forget a workshop experience at a Nanoscience and Nanotechnology Conference three years ago in San Sebastian, Spain. He mingled with scientists and ended up having a conversation with a couple who had been friends with a French scientist.

The future of Korea’s nuclear reactor industry, which is even envied and resented by the French, will be decided today. The committee, asked to canvass public opinion on the government’s proposal to permanently halt the construction of the Shin Kori 5 and 6 reactors as a part of its nuclear phase-out policy, will choose among three alternatives: to stop the construction, to resume the construction, or to suspend a decision. Confusion and controversy is unavoidable no matter what it recommends.

Let me start with the third possibility. If opinions of 471 civilian participants in a survey are divided within the margin of error of 6 to 8 percent, keeping the status quo — which means resuming construction — would be the best choice. If the survey falls within the margin of error due to the small sample size compared to the size of the population, it is generally believed that the people would be happy with the status quo — or no change.

If the committee recommends construction be resumed, there will be less confusion. The presidential office already said that it would stick firm to the president’s nuclear phase-out policy regardless of the committee’s decision. So, even if the government cannot stop construction on those two reactors, it can continue with a policy of decommissioning old reactors and not allowing new constructions in order to gradually phase out our reactor-dependent energy infrastructure.

The most turbulent ramifications would come from the proposal to permanently kill the Shin Kori 5 and 6 projects. Industry and the science community will strongly protest. The decision also can be legally contested. Because the industry will be severely shaken, Korea won’t be able to export reactors. The industry estimates there is global demand for 100 reactors worth 600 trillion won ($529.6 billion). When operational and maintenance technology is included, the market could be worth over 2,000 trillion won.

Yet the minister of trade, industry and energy is a champion of the nuclear phase-out policy. The ministry sent a junior-level official to Saudi Arabia to discuss a reactor project worth up to 500 trillion won. Korean reactors could be successes for the next 30 years even at their current technology level, according to Cho, who fumes at a government trying to kill an industry that could bring foreign currency to the country for the next three decades.

There is also the bigger work of establishing a public consensus on the plan to wean the country off nuclear power, which has long been responsible for supplying cheap electricity to a resource-poor nation. The latest polling has been restricted to the issue of the Shin Kori 5 and 6 reactors. A broader nuclear phase-out is a different matter as the country’s future is at stake. The government must carry out a broad referendum even if it takes a year or two to ask the public if it approves of the plan.

The recent canvassing has been controversial from the start. It was accused of being biased. The facts were distorted. Procedural transparency could be questioned. The committee also did not disclose the results of three trial surveys. It has blocked the public’s right to know. The result of the fourth survey would be announced five days later. Even with tight security, there remains the possibility of tampering with the findings. The committee did not allow industry or experts to observe the procedures. The findings could well be contested.

Even if the committee-led survey tilts towards stopping the reactors under construction, the government must not think the general public agrees with its phase-out policy. It could be doing a serious wrong to future generations by destabilizing a reactor industry that took much time and money to build.

There will be others who would be happy to pick up Korea’s technology exports. France could be one. President Moon Jae-in should visit France one day. He might be warmly welcomed by the French for reviving their sagging reactor industry. He would have done what no French president was able to achieve.