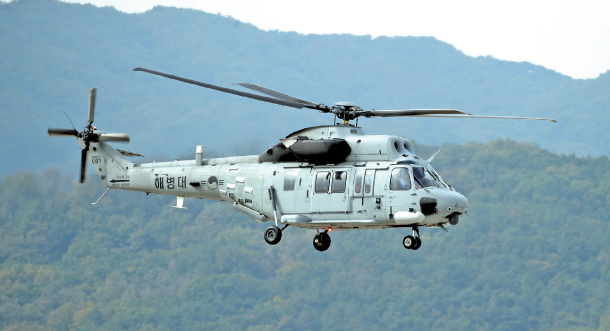 A Surion helicopter hovers during the Seoul International Aerospace & Defense Exhibiton held at Seoul Air Base in Seongnam, Gyeonggi, on Monday. [YONHAP]

Korea Aerospace Industries (KAI), which has been embroiled in multiple scandals including embezzlement and product malfunctions, is starting to show signs of recovery as an investigation by the prosecution draws close to its end.

“If there is anything wrong related to our past business activities then we will correct it,” said Jang Sung-seob, vice president and acting head of KAI at the Seoul International Aerospace & Defense Exhibition 2017 Thursday. “We will normalize our business and make this an opportunity for future growth.”

When the prosecution first investigated KAI on accusations of corruption in July, it was aiming to dig up the company’s corrupt activities in the weapons acquisition industry. The prosecution later narrowed down its target, accusing the internal management of the company of corruption, rather than the entire defense industry.

The case is essentially at its end with KAI’s nine executives, including former CEO Ha Sung-yong, indicted. President Moon Jae-in also showed his support for KAI, visiting the aircraft maker’s booth at the Seoul exhibition and riding a T-50 supersonic advanced trainer, one of the products made by the Korean company.

The raid and suspicions of KAI being involved in illicit trading pushed the company into ruin. After the Board of Audit and Inspection reported that the Surion helicopter had numerous defects in July, the Defense Acquisition Program Administration halted its outstanding order of the vehicles.

While the administration ordered around 200 Surion helicopters, KAI has only delivered around 60. The deal is yet to be resumed, though it has not been called off yet. In the process, the company failed to collect 1.3 trillion won ($1.15 billion) worth of investment that it injected into the development of the Surion helicopters. Industry insiders say that its failure to win a bid to sell vehicles to Indonesia was also due to the audit.

Due to this list of failures, KAI’s annual sales revenue is expected to fall by over 10 percent this year to roughly 2.3 trillion to 2.5 trillion won.

KAI is hoping to recover its reputation by proving its resistance to icy weather by June next year.

“There is a lot of speculation regarding KAI’s involvement in illegal activities, however the Defense Acquisition Program Administration is still closely observing the actions from the Board of Audit,” a spokesperson from KAI said. “As Kim Jo-won, former secretary-general of the Board of Audit and Inspection has been nominated as the new CEO, we expect the problems regarding the audit will be settled.”

Experts say that once rumors of KAI corrupt activities are proven false, it will likely win contracts to supply its advanced pilot trainers to the United States early next year.

“Considering the high credibility KAI earned from the U.S. army and KAI trainer’s quality, I would say there is an 80 percent chance of KAI winning the contract,” said Kim Chang-joo, aerospace engineering professor at Konkuk University.

Boosted by these predictions, KAI’s share price soared 17.82 percent from the previous trading day to 56,200 won on Thursday. It was the first day that trading of KAI shares resumed after a week-long ban.