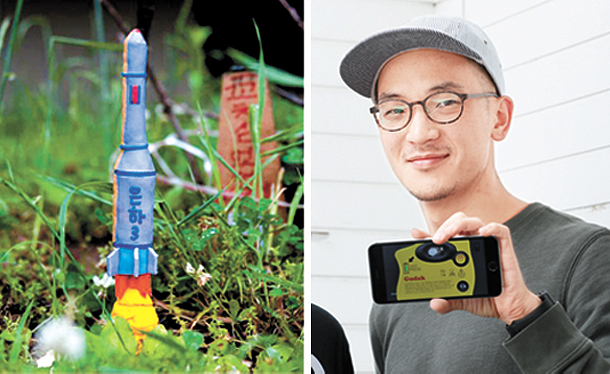 Kang runs an art academy in Gangnam District, southern Seoul, and is the CEO of Screw Bar, a leading information technology (IT) startup that established Gudak, an analog disposable camera app for iPhone OS (iOS). Modeled after Kodak Moments, the app limits users to 24 photos per roll every twelve hours, and makes them wait three days to access the photos.

“I truly enjoy working simultaneously as an artist, an art instructor and CEO of Screw Bar,” Kang says. “If I devote myself to only one job for a living, then something I found fun before can become boring, and I don’t want that to happen.”

Three other Screw Bar members are also N-jobbers who run another business while managing the startup.

Starting out with weekly meetings to create something fun, Kang said Screw Bar turned into a successful business venture with the development of Gudak. Released in July, Gudak was downloaded from the Apple App Store one million times over the past three months. Even with a charge of about $0.99, it was Korea’s most continuously downloaded app that month, and also holds that record in 15 other nations.

But Kang says Gudak’s success is not a coincidence. He believes the app would not have developed were it not for his other career as an artist.

“In general, when someone begins developing a product, they think about the customers’ desire first,” Kang explained. “Artists are different. We are used to being introspective and focusing on our desires.”

Kang says he made Gudak because he got “tired of the fast and convenient apps” and wanted a camera app that is “old-fashioned yet unique.”

Even with Gudak’s success, this N-jobber does not want to give up his life as an artist and art instructor.

Kang predicts that in the future, “it will be important for people to test the waters here and there to discover their true value, as opposed to making goals for just one career path.” He also thinks society’s expectation of individuals committing solely to one career path or field of study will gradually decrease.

Kang is currently preparing to exhibit his work, “Lollipop,” about people’s desensitization to serious and tragic news. “We emotionally feel compassion for accident victims and sympathize with them, but superficially, we feel relieved that we are not the persons directly involved,” Kang wrote.

His art is expected to be displayed on Oct. 21 at Gallery ZEINXENO in Seoul’s Jahamun Street.