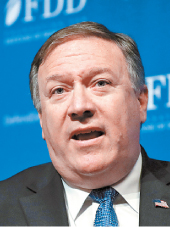 CIA Director Mike Pompeo said Thursday that North Korea is months away from perfecting its nuclear weapons capabilities at a security forum in Washington.

“They are close enough now in their capabilities that from a U.S. policy perspective, we ought to behave as if we are on the cusp of them achieving that objective,” Pompeo said, referring to North Korea’s ability to strike the United States with a nuclear-tipped ballistic missile. Pompeo was speaking at the conservative think tank Foundation for Defense of Democracies’ National Security Summit.

“They are closer now than they were five years ago, and I expect they will be closer in five months than they are today, absent a global effort to push back against them,” said the CIA chief. “That is each test, successful or unsuccessful as defined in the West, continues to develop [North Korean leader] Kim Jong-un and his engineers’ and scientists’ knowledge base. They are intent upon completing that whole chain of activity.” He referred to re-entry technology and also the miniaturization of a nuclear device to put on the tip of an ICBM capable of hitting mainland United States.

“We are at a time where the president has concluded that we need a global effort to ensure that Kim Jong-un doesn’t have that capacity,” he said.

Global proliferation is at the “top of the president’s mind,” Pompeo said, adding that Trump “urges us all to think about the proliferation issue in every venue, not just North Korea and Iran.”

But when asked whether the perception of North Korea’s threat changes fundamentally at the moment there is consensus that the regime has perfected such capabilities, Pompeo replied, “I’m not sure that changes dramatically. They are so far along in that, it’s now a matter of thinking about how do you stop the final step.”

He continued, “When you stare even just at Asia, and you watch as North Korea grows ever closer to having its capability perfected, you can imagine others in the region also thinking that they may well need that capability to protect themselves.”

The Trump administration has been pursuing a peaceful pressure campaign against North Korea while reiterating that it keeps all options on the table, including military ones.

Trump is “not going to accept this regime threatening the United States with nuclear weapons,” National Security Adviser H.R. McMaster said at the same event.

He continued, “There are those who would say, ‘Well, why not accept and deter.’ Well, accept and deter is unacceptable. This puts us in a situation where we are in a race to resolve this short of military action.”

Former CIA Director John Brennan pointed out at a different event Wednesday there could be a 20 to 25 percent chance of conflict with North Korea. “The prospects of military conflict in the Korean Peninsula are greater than they have been in several decades,” he said.

Brennan said at Fordham University in New York that despite military conflict not being very probable, “if it’s a one-in-four or one-in-five chance, that’s too high.”

Brennan told NBC on Thursday that Trump’s top military officials including Defense Secretary Jim Mattis may need to talk Trump out of war with North Korea.

He added, “I’m concerned there could be some kind of clash between North Korean and South Korean forces.”

This comes as delegates from the six party nations gather in a two-day nonproliferation conference in Moscow that kicked off Friday, which sets a stage for interactions between representatives of the two Koreas, the United States, Japan, China and Russia.

North Korea’s delegation will be led by Choe Son-hui, director general of the North American affairs bureau at the Foreign Ministry. Former U.S. Under Secretary of State Wendy Sherman, Robert Einhorn, a former special adviser to the State Department and nuclear scientist Siegfried Hecker are expected to attend the so-called Track 1.5 forum.