Where humans and robots coexist : Da Vinci Creative offers cautiously optimistic view of a future without borders between real and virtual

Where humans and robots coexist : Da Vinci Creative offers cautiously optimistic view of a future without borders between real and virtual

Visitors of the Seoul Art Space in Geumcheon District, southern Seoul, take part in “Inferno,” a dance performance piece by Bill Vorn and Louis-Philippe Demers in which participants’ arms are controlled by robots, on Friday. The performance opened this year’s Da Vinci Creative exhibition, which runs through Nov. 5. [SEOUL FOUNDATION FOR ARTS AND CULTURE]

In 1970, Masahiro Mori published his seminal essay “The Uncanny Valley,” in which he argued that as robotic technologies advance, humans will feel a rising sense of familiarity toward its creation to the point of hostility. That hostility, he wrote, will fade when robots become indistinguishable from humans.

This year’s Da Vinci Creative at the Seoul Art Space in Geumcheon District, southern Seoul, adopts Mori’s idea of the uncanny valley and throws in a question mark. The exhibition, organized by the Seoul Foundation for Arts and Culture, seeks to explore what kind of future we are creating for ourselves as we continue to build stronger and smarter robots.

The Da Vinci Creative began in 2010 as a stage for new media artists to present work using the latest digital technology. This year’s show, under the theme “Uncanny Valley?,” revolves around the convergence of robotic technology and mankind, and how the boundaries between the two are slowly coming down.

The exhibition opened Friday with a dance performance by Bill Vorn and Louis-Philippe Demers titled “Inferno.” Twelve robotic arms hung from a ceiling and were attached to 12 willing volunteers, whose upper-body motions were controlled by the robots based on the artists’ programming. Their legs, though, remained free. 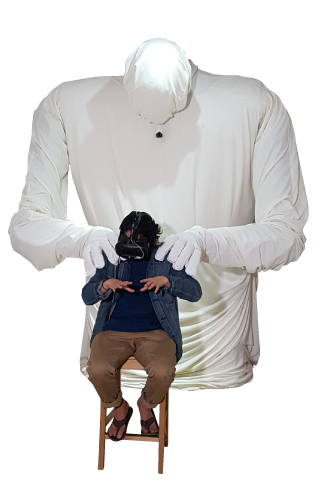 One of the creators of “Ethereal” shows how his robot interacts with humans. [YOON SO-YEON]

“By giving people a chance to feel how robots can take control of their bodies but at the same time leave some command to the person, the performance asks how we can become one with robots in the future,” said Choi Doo-eun, curator of the exhibition.

The performance was held across two days. Other opening events included an augmented reality performance by Herman Kolgen titled “Impakt,” and an electronic dance concert by DJ Kirara, Hitchhiker and Alain Thibault.

The exhibition features 13 multimedia installations from new Korean artists sponsored by the Da Vinci Creative as well as artists invited from abroad. Although each piece carries its own perspective and interpretation of new technology, all of them seek to paint a world where humans can live in harmony with robots or utilize them in unconventional ways.

“Ethereal: Too Perfect for This World,” by Josef Lee and Daniel Seung-min Lee, for instance, is a giant robot that sits behind a person and mimics their every move. When they move their hands in a massaging motion, the robot, too, massages the person’s shoulders.

Curator Choi explained that both works revolve around the idea of touching. “It shows us how technology these days is breaking the wall between reality and virtual reality,” she said, “wherein digital fiction becomes reality, and vice versa.”

Compounding this theme, “Wave Series” by the artistic team known as VOID appears to be a projection of lights from afar, but up close, one sees that the moving objects are actually physical materials like strings and metal.

In “Pataphysical Pond,” Dakd Jung plays with the unusual magnetic properties of a black liquid substance, utilizing it to humorous effect.

“Touch Space” by Nolli offers a virtual reality experience coupled with the touch of real tangible objects, and “Enigma” by Alain Thibault and Yan Breuleux features videos of actual conversations between humans and internet chatbots.

“We are at the last point of the ‘uncanny valley’ in which we can tell humans and robots apart,” Choi said. “Through this exhibition, I hope people will think about what humanity is and prepare ourselves for the upcoming future.”


This year’s Da Vinci Creative runs through Nov. 5 at the Seoul Art Space in Geumcheon District, southwestern Seoul. It is a 10-minute walk from exit 1 of Doksan Station on subway line No. 1. For more information, visit www.sfac.or.kr.