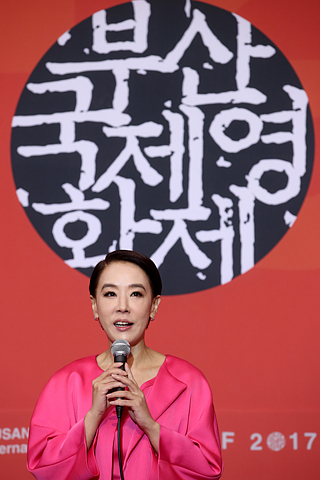 The 22nd Busan International Film Festival (BIFF) drew to a close Saturday with “After My Death” by Korean director Kim Uiseok and “Blockage” by Iranian director Mohsen Gharaei sharing the top award in the main competition category.

Co-hosted by local movie stars Kim Tae-woo and Han Ye-ri, the closing ceremony was held at the outdoor theater of the Busan Cinema Center in the southern port city of Busan.

Kim and Gharaei shared the New Currents Award, which is given to the two best feature films by up-and-coming Asian directors.

“After My Death” sheds light on Korean society from the perspective of a suicidal teen girl, while “Blockage” depicts the hard lives of laborers in Tehran, according to BIFF officials.

Korean actors Park Jong-hwan and Jeon Yeo-bin went home with the Actor and Actress of the Year awards for their performances in “Hit the Night” and “After My Death.”

“Malila: The Farewell Flower” by Thai director Anucha Boonyawatana and “The Scythian Lamb” by Japan’s Daihachi Yoshida won the Kim Jiseok Award, created this year to honor Kim Ji-seok, the deputy executive director of the festival who died of a heart attack while attending the Cannes Film Festival in May.

The 22nd BIFF opened on Oct. 12 and featured 300 films from 76 countries led by the opening film “Glass Garden” by Korean director Shin Suwon.

In a closing news conference, the BIFF organizing committee said that a total of 192,991 people participated in this year’s festival, a rise of about 17 percent from last year’s 165,149.

“The audience number increased from last year despite various internal and external difficulties,” Kang Soo-youn, executive director of the BIFF, said at the conference. “The Busan Film Festival has begun to grow again. It has been confirmed that the owners of the festival are the audience and films.”

Last year, film industry associations boycotted the event in protest of what they believed was political retaliation by the city of Busan over the festival’s screening in 2014 of a documentary film critical of the Park Geun-hye government’s handling of the Sewol ferry sinking. The ferry disaster claimed more than 300 lives.

President Moon Jae-in made a surprise visit to the festival Sunday, pledging government support to help normalize the festival plagued by political influence and budget constraints.