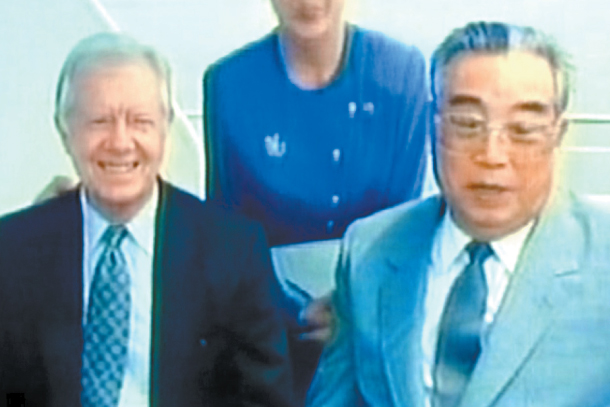 Former U.S. President Jimmy Carter landed in North Korea on June 15, 1994 as Washington was getting close to bombing the Yongbyon nuclear facility. After talks with then-Pyongyang leader Kim Il Sung, Carter managed to broker a deal that diffused the crisis - and prevented another war on the peninsula. [YONHAP]

When I was assigned last January to cover the Unification Ministry, which handles inter-Korean cooperation, the news flow was barely a trickle.

The Park Geun-hye administration had a hawkish policy toward Pyongyang, and Park was in the process of being impeached and removed.

Things will change, people told me - and they did, fast. U.S. President Donald Trump declared that his country would “totally destroy” North Korea if it had to defend itself or its allies. North Korean Foreign Minister Ri Yong-ho said his country would shoot down American aircraft even if they weren’t in its airspace because Trump had “declared war.” Park’s successor Moon Jae-in was totally cold-shouldered by North Korean leader Kim Jong-un and is rumored to be disdained by Trump too.

The North Korea crisis has become so bad that a second Korean War is feared. 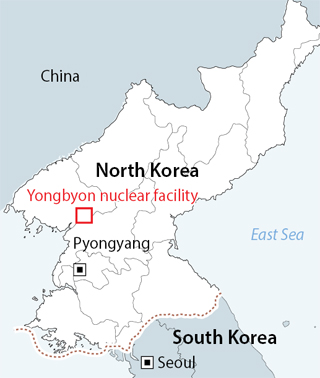 Analysts are actively downplaying those fears.

Abe Denmark, deputy assistant secretary of defense for East Asia for former U.S. President Barack Obama, told The Atlantic that if the United States was actually planning for war, we would have already seen something that can’t be covered up: an evacuation of Americans from South Korea, who number over 100,000.

Dennis Blair, a former director of national intelligence and commander of U.S. forces in the Pacific, added, “If you’re actually going to war, you have to do a lot of things, primarily in terms of logistics and communications and mobilizing reserve forces ..... and you don’t see any of those.”

The last time tension got this bad on the Korea Peninsula was in the early 1990s, when the Bill Clinton administration was considering a preemptive air strike on the Yongbyon nuclear facility, about 55 miles north of the capital of Pyongyang, with precision-guided bombs. It’s worth taking a look back at that crisis - which at its height was far scarier than the situation today - to see how it arose and how it was ultimately defused.

Nuclear weapons on the Korean Peninsula actually go back to the dawn of the nuclear age. As journalist Don Oberdorfer wrote in “The Two Koreas,” colonizing power Japan actually moved its nascent nuclear weapons program to Korea during World War II when American attacks on the home islands intensified. After the war and the division of the peninsula, the Soviet Union gave North Korea a small nuclear reactor but insisted on inspections by the International Atomic Energy Agency (IAEA) to prevent any weapons development. After China detonated its first atomic weapon in 1964, North Korean leader Kim Il Sung asked Chairman Mao Zedong to share the technology - which Mao staunchly refused. He thought North Korea too small a country to need them. So Pyongyang had to go it alone. By the 1980s, North Korea had a five-megawatt reactor in Yongbyon and research on a plutonium-based weapon had begun. By 1990, it began turning spent fuel into weapons-grade plutonium.

The North signed the Nuclear Non-Proliferation Treaty (NPT) in 1985 to seal a deal for four light-water reactors from the Soviets for power generation.

But it wasn’t until January 1992 that it signed a safeguard accord with the IAEA, nearly five years after the stipulated deadline.

The first nuclear crisis began that year when the atomic watchdog uncovered a discrepancy in the amount of plutonium North Korea claimed it reprocessed and insisted on inspections to determine Yongbyon’s nuclear history. The IAEA took particular issue with two suspect sites detected by satellite imagery from U.S. intelligence, which the North denied were nuclear facilities.

In March 1993, North Korea announced it would withdraw from the NPT after a three-month waiting period. In a statement issued through the official Korean Central News Agency, Pyongyang accused the NPT of being a tool for implementing “U.S. hostile policy” towards the regime, aimed to “disarm it and destroy its system by force.” At the same time, Pyongyang claimed not to have any intention to produce nuclear weapons, saying its nuclear activities were confined to production of electricity.

Following marathon talks with the United States, North Korea suspended its decision to pull out of the NPT in June 1993 and announced it would allow IAEA inspections. But later that year American intelligence agencies estimated that Pyongyang had already extracted about 12 kilograms (26 pounds) of plutonium - enough to produce one or two nuclear bombs.

On March 1, 1994, IAEA inspectors arrived in the North only to be blocked from sensitive sites within the Yongbyon plant. Two weeks later, the agency ordered their officers home and decided to lodge a case with the United Nations Security Council.

Washington canceled a third round of talks with Pyongyang and prepared to draw up sanctions in the UN, which the regime castigated as an “act of war.” When the two Koreas held a meeting in the truce village of Panmunjom on March 19, 1994, Park Yong-su, the North’s negotiator, told his South Korean counterpart that Seoul wasn’t far away. If war broke out, he said, it would become a “sea of fire.”

That chilling remark prompted South Korean President Kim Young-sam to green light the U.S. deployment of Patriot missiles, which had been delayed during nuclear negotiations between Pyongyang and Washington.

Oberdorfer, a former correspondent for The Washington Post and professor at the Johns Hopkins School of Advanced International Studies, wrote that the first shipment of Patriot missiles arrived in Busan in mid-April 1994 and were deployed by the end of the month. By then, a battalion of U.S. Apache attack helicopters were brought in to replace older Cobras. More were on the way. Additional heavy tanks, Bradley fighting vehicles - which were the modern replacement for armored personnel carriers - advanced radar tracking systems to pinpoint North Korean artillery, aircraft spare parts and new ammunition-loading equipment arrived as well.

About a thousand more troops landed quietly with the additional weapons, bringing U.S. forces up to their full authorized strength of 37,000. More heavy combat gear was loaded aboard American ships, to be within easy reach of Korea if needed.

North Korea announced its withdrawal from the IAEA on June 13. Even so, as an ongoing member of the NPT, the North was still required to undergo IAEA inspections.

One travel agency in South Korea was quoted by the JoongAng Ilbo in early June as saying that nearly 1,500 clients from Europe and the United States were canceling their trips every month.

Data from the Korea Tourism Organization indicated that nearly 1.2 million South Koreans left the country from January to May 1994, a 40 percent increase from the year before.

The crisis turned when former U.S. President Jimmy Carter volunteered to visit North Korea, which Clinton agreed to as long as Carter made clear he was acting as a private citizen.

On June 15, 1994, Carter crossed the DMZ as the Pentagon was getting closer to bombing the Yongbyon nuclear facility. Washington knew the North would retaliate after any strike and military options significantly raising American forces in and around South Korea were sprawled out on Clinton’s desk.

William Perry, then-secretary of defense, told Oberdorfer that Washington at that time didn’t know what to expect of North Korea.

“We saw the deployment on the one hand as being provocative. That was the down-side. On the other side, we saw it as demonstrating a seriousness of purpose ..... We didn’t know enough about the Korean mentality to know how to gauge the negative aspects versus the positive aspects of the signal we were sending. Therefore, I chose in my own thinking to set that signal aside, not knowing how to assess it, and recognizing we could have either of those two possibilities.”

On June 16, Carter brokered the outline of an agreement with North Korean leader Kim Il Sung through which Pyongyang agreed to freeze its nuclear program in exchange for Washington’s halt of the sanctions drive in the UN and resumption of inter-governmental talks.

Carter announced the breakthrough deal in an interview with CNN, the only film crew allowed to accompany the former president. Clinton and his top aides, who had been gathered in the White House for another marathon meeting on the North Korea crisis, paused to tune in.

Mike Chinoy, the CNN journalist who led the film crew, wrote in his 2008 book, “Meltdown: The Inside Story of the North Korean Nuclear Crisis,” that North Korean officials were so relieved at the outcome that they took Carter for a cruise on Kim’s luxurious yacht. Chinoy and his CNN colleagues were presented with the “most precious possible gift - our very own Kim Il Sung buttons.”

Four months later on Oct. 21, 1994, North Korea and the United States signed the so-called Agreed Framework in Geneva, through which Washington agreed to finance and supply light-water reactor power plants with a total generating capacity of approximately 2,000 megawatts by a target date of 2003. South Korea later volunteered to pay most of the $4.6 billion cost, around 70 percent, with Japan providing the rest.

In exchange, Pyongyang agreed to freeze its graphite-moderated reactors, and ultimately dismantle the reactors. It also pledged to allow the IAEA to monitor the freeze and provide full cooperation for the purpose.

The Korean nuclear crisis was over - temporarily.