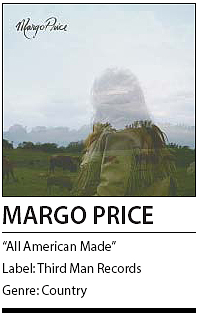 Margo Price extends her deep country roots in new directions on “All American Made,” her sophomore album which adds tads of Memphis soul and dabs of gospel and even reggae to her solid East Nashville foundations.

Price’s personal story and struggles were deeply and movingly part of her 2016 debut “Midwest Farmer’s Daughter” and the themes on this record include the travails of the working class - especially women - and their place in the country’s big picture.

Her takes on romance and daily living are far from one-sided, as she admits causing pain (“Weakness’’) as much as suffering it (“Don’t Say It’’) and the fact that she’s a working mother has an understandable effect across several songs, including “Pay Gap” and “Nowhere Fast.”

The first-rate songwriting, mostly in collaboration with husband Jeremy Ivey, and the great performances on “All American Made” can help Price break even further through any barriers - real or artificial.