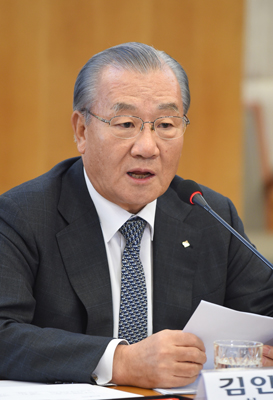 Korea International Trade Association (KITA) Chairman Kim In-ho resigned on Tuesday, four months before his term officially ends in February, a move that may herald an exodus of organization heads selected under the Park Geun-hye administration.

According to the business lobbying group, Kim submitted his letter of resignation at the organization’s board of directors meeting held that morning, putting an end to his three-year term.

“I figured it would be best for the association to run without me,” Kim said at a press briefing held at the group-run World Trade Center Seoul in Samseong-dong, southern Seoul right after his resignation. “The government has recently sent a message to the effect that I resign.”

“I have felt a substantial gap between the government’s policy drive and mine on Korea’s industries and trade,” Kim said. “I believe companies should be able to do business in the least-regulated environment so they can fully show off their potential and ultimately boost trade.”

Kim added that he is deeply concerned that the current administration has not mentioned the word “market” while discussing economic growth and said he hopes someone who can be more persuasive in delivering such concerns to the administration can become the next chairman.

While it has become a norm in Korea for heads of public enterprises to quit during the administration transition period, critics of Kim said it is improper to drag someone down just because of differing political opinions.