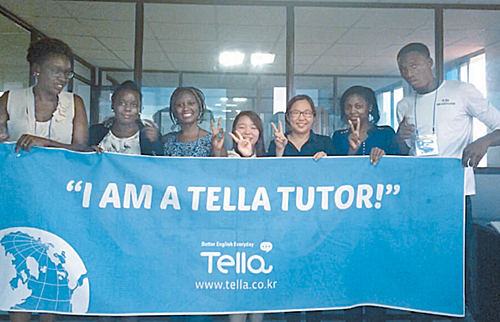 The Korean startup Tella, a conversational English training program for office workers that uses the messenger app Kakao Talk, has grown to serve about 2,000 customers using 30 teachers from Uganda and the Philippines, where English is the official language.

This connects users in Korea, who can flexibly schedule English learning around their busy schedules and can even have calls based on the messages they have exchanged with teachers, with native speakers who do not necessarily have to be living in Korea, thereby offering valuable jobs in countries abroad while also providing English education here at competitive rates.

Tella is only one of the startups in Korea that profit while addressing social issues like pay gaps or labor rights. Co-founder and CEO Jin Yoo-ha first came up with the business idea in Burundi, Africa, where she was doing volunteer work as a university undergraduate.

“In Africans nations with low GDPs,” she said, “most university graduates were temporary contract workers and a lot of them were unemployed. As the quality of service is good, the teacher’s nationality is not a problem. The service was able to attract the attention of investors because it had a social cause and used IT infrastructure.”

A similar company, UpDreamKorea turns drawings made by children in Cambodia and India into patterns that are used on hats, bags and clothes, and uses the profits to help these children.

Yet another startup focuses on labor rights. In April, the IT-based logistics startup Mesh Korea received permission from the government to offer a comprehensive insurance plan for two-wheel vehicles for its 10,000 or more delivery personnel. The company focuses on the health and safety of its employees, and if an accident occurs during delivery, workers can receive unlimited compensation for injuries and up to 300 million won ($265,767) for damaged goods.

Before Mesh Korea, the local insurance industry had refused sales of comprehensive insurance plans for delivery workers due to the high rate of accidents, since around 1,500 are known to be wounded annually.

“We’ve visited related government ministries and the National Assembly for a year, insisting on reforms to relevant laws, as well as persuading insurance companies,” said Rhyu Joung-bum, CEO of Mesh Korea. “As a result, we were able to purchase comprehensive insurance as an organization.”

The delivery app Baemin soon followed. The service’s operator, Woowa Brothers, announced in September it has established “rider insurance” for its workers.

Tackling a different social problem, the startup Mom-sitter operates a mediating platform that connects parents in need of a babysitter with university students. The young babysitters take or pick up children from preschools or kindergartens and play with them inside the house or teach them English. Those with experience in infant or child care can also apply. The length of each babysitting period can be as short as needed to run a quick errand or up to several days. Combined with reasonable pricing, the service has secured the registration of over 15,000 parents in its first year.

A common obstacle these social startups face is securing investments due to their relatively weak profitability. Compared to the United States and Europe, Korea has a weak background when to comes to impact investing, which refers to investments intended to create a positive effect on society. In impact investing, the social impact the startup is seen as a more important indicator of success than financial profits.

Some say the government should lead this movement instead of waiting for accelerators and venture capitals, along with social companies or non-profit organizations, but for now, these brave few are leading the way.