Three Korean footballers will no longer feature in an English cup competition this season after their respective clubs were eliminated in the round of 16. 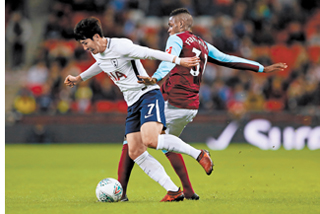 Son Heung-min, left, vies for the ball with West Ham’s Edimilson Fernandes during a League Cup match at Wembley Stadium on Wednesday. [AP/YONHAP]

Son bagged two assists in his 100th match for Tottenham but couldn’t celebrate in the end as the north London club blew a two-goal lead.

The 25-year-old, who joined the Spurs in 2015, started with Spain’s towering striker Fernando Llorente to lead his team’s attack. In the sixth minute, Son delivered a fine pass to Moussa Sissoko for the Spurs’ first goal.

Son then earned his second assist of the match in the 37th, when his pass found Dele Alli. The 21-year-old’s curled shot took a deflection but found the net for a 2-0 lead.

It was the first time since October 2015 that Son collected two assists in a match. He previously set up two goals in the Spurs’ 4-1 win over AS Monaco at the UEFA Europa League match.

But Son, who scored his first league goal of the season three days ago against Liverpool, failed to put his name on the score sheet and watched his team surrender three goals to West Ham in the second half. Andre Ayew netted twice to level the score in the 60th and Angelo Ogbonna’s header nine minutes later put West Ham ahead. Son was replaced by Georges-Kevin Nkoudou in the 83rd.

On Tuesday, Ki played his first full match of the season but couldn’t stop United’s Jesse Lingard from scoring two goals. Lee almost scored a goal against Bristol when his shot hit the bar in the sixth. And he was taken off the pitch in the 67th due to a leg injury and was replaced by Freddie Ladapo.

Kwon Chang-hoon of Dijon FCO saw his club fall 2-1 to Stade Rennes in the round of 32 match of the French League Cup at home. His cross met Frederic Sammaritano for Dijon’s 1-0 lead in the 15th.

Suk Hyun-jun of Troyes AC assisted Francois Bellugou’s equalizer against Amiens SC, but his club was eliminated with a 2-1 loss.