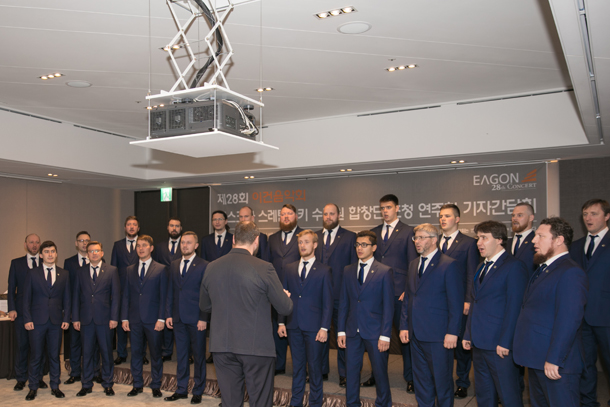 The Moscow Sretensky Monastery Choir is touring Korea for the first time since its establishment in 1397. [NEWS1]

With their tender but powerful vocals, the Moscow Sretensky Monastery Choir is visiting six cities in Korea for the first time since their establishment in 1397 as part of a free concert series that has been organized by Eagon Holdings since 1990.

The first of eight concerts kicked off in Busan on Thursday. The choir will be making stops in Goyang, Gyeonggi, Incheon, the Seoul Arts Center and the Myeongdong Cathedral of Seoul, Gwangju and Daegu.

The Eagon Concert series not only provides free concerts to the public but also has been offering a “Master Class” program for young talented musicians, in which acclaimed musicians from around the world provide music tutoring to underprivileged people.

The organization also hosted a contest for songwriters to create a remake of “Arirang,” one of the most well-known Korean folk songs and has been added to the list of Unesco Intangible Cultural Heritage of Humanity. The choir will get a taste of local culture by performing the winning version of “Arirang,” and the winner will be awarded 1 million won ($889.36).

Before heading out on their nationwide tour, the choir met with local media on Wednesday.

“The choir is made up of of thirty people, all from music and theology schools in Moscow. Although most of us are theologians who plan to become priests in the future, we also sing Russian folk songs and wartime music in addition to church music,” said Nikon Zhila, the conductor of Sretensky Choir.

Moscow Sretensky Monastery Choir is one of the more well-known choirs in Russia, especially beloved by President Vladimir Putin and the Patriarch Kirill of the Church. The Choir performed at the opening ceremony of 2014 Sochi Winter Olympics, singing the Russian national anthem with soprano Anna Netrebko.