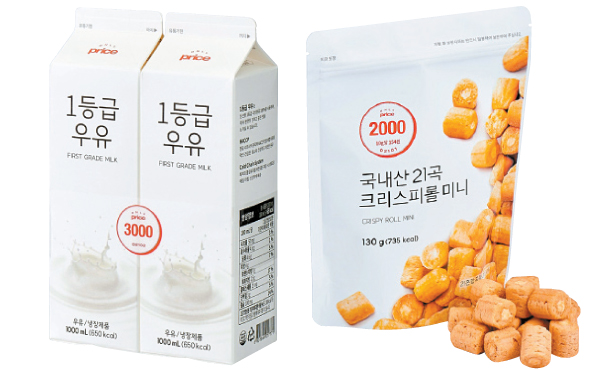 Lotte Mart introduced its expanded in-house label Only Price on Thursday, emphasizing the consistent pricing of the brand in an apparent attempt to rival Emart’s No Brand.

The discount chain held a media event to introduce the brand’s strategy and business goals. Only Price’s products quietly hit shelves in February this year, but the company waited nine months before it felt confident enough in the range to announce it publicly.

Lotte Mart says that it wanted to receive consumer feedback before announcing the launch. In the meantime, its initial lineup of 25 products has expanded to 134. Around 83 percent of the products released so far sold as well as or better than best sellers in the same category.

Like other retailers, Lotte Mart’s in-house products are made by partnered manufacturing companies and marketed and sold under the Only Price label. Compared to No. 1 best sellers from well-known brands, Only Price is 51 percent cheaper.

Lotte Mart is hoping to differentiate its Only Price label with a “one price policy,” meaning its products will never be subject to discounts and deals. Discount chains frequently hold special promotions to lower product prices amid fierce competition in the market.

“From the retailers’ point of view, every product has a life cycle - there’s a point where they don’t sell well anymore and therefore need to be disposed of. This is where drastic discounts come in,” said Nam Chang-hee, senior director of Lotte Mart’s merchandising headquarters. “But this prompted distrust among consumers on the product’s original price.”

To tackle consumers’ mistrust of pricing, the price of Only Price products is printed in bold, red letters on the front of the packaging. The price is set based on a calculated average of how much consumers will pay for a certain good. The prices are all set below this average. Goods that do not sell well will be disposed or donated.

The company plans to expand Only Price’s lineup, mainly made up of snacks and daily necessities, to around 200 products and expects sales of 53 billion won ($47 million) this year.

Home meal replacements and fruit-based beverages will be added next year when Lotte aims to release 405 products and raise 130 billion won in annual sales. The total price of these 405 products will be 35 percent cheaper compared to best sellers in each category, according to the company.