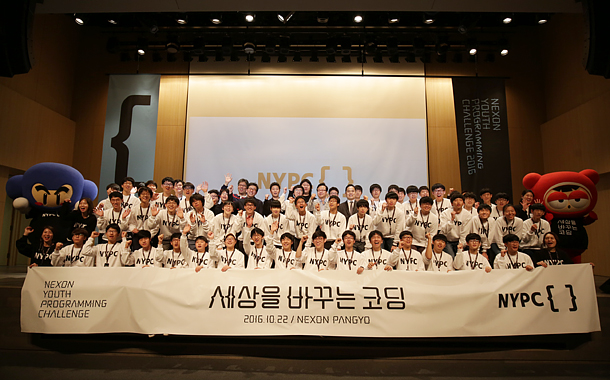 Participants of last year’s Nexon Youth Programming Challenge pose for a photo after the event on Oct. 22, 2016. More than 3,000 students have decided to participate in this year’s event, amid growing interest in coding in Korea. [NEXON]

Nexon, a major Korean game developer, is hosting a programming competition for local youth on Saturday.

The annual event, called the Nexon Youth Programming Challenge, is part of the company’s effort to make programming more appealing to students. The Korean government recently made coding a mandatory part of the curriculum in middle and high school, in line with President Moon Jae-in’s pledge to prepare for the so-called fourth industrial revolution with more education in software development.

Although coding has been highlighted as an important skill, many students without proper knowledge or genuine interest in the field have found it difficult to approach.

“I am taking coding lessons on the weekends to learn different computer languages because I heard it’s going to be part of the regular curriculum at my school soon,” said Kim Sung-hyun, a 15-year-old middle school student in Ulsan. “But it’s really difficult for me to stare at a computer for hours and type different codes when I don’t really know what they are.”

With the government’s decision to designate programming as a regular part of the curriculum, the number of students like Kim attending after-school academies, also known as hagwon, is on the rise, putting more financial burden on parents in a country where private education costs are already steep. Still, such hagwon have grown in popularity among job seekers and college students.

“Although people’s interest in programming is increasing, amplified by the government’s recent curriculum decision, they are also getting anxious because they lack proper knowledge or genuine interest in the field,” a Nexon official said. “It’s important that students approach it as if they are playing rather than through books or simply because it is required of them.”

“Our goal,” the official added, “is to invest our capital and knowledge as a leading game maker and create a stage where Korean students can experience programming as if they are playing computer games, and to ultimately motivate them to learn programming.” 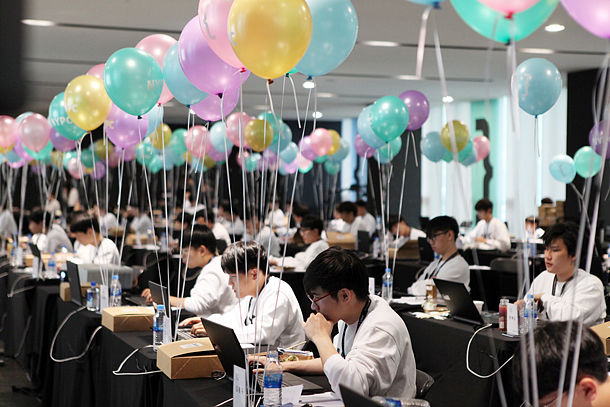 Students compete in Nexon’s inaugural programming competition in October 2016. The competition is a part of Nexon’s initiative to raise interest in coding among Korean youth. [NEXON]

This is the second year that Nexon is hosting the event. During its inaugural event last year, 2,500 students took part, and this year, 3,400 students have thrown their hats in the ring. Among them, 70 have qualified for the final round on Saturday.

As the event’s sponsor, Nexon is opening resources it has accumulated over the years, including intellectual property from its games, to local education companies like Startlink and Entry. The company will allow Entry to use Maple Story, one of Nexon’s more popular games, especially among elementary and middle school students, to create educational content on programming using characters, music and other elements from the game. The content will be used in the event.

“The hallmark of our plan is to expand the depth of experience in programming among our students, which is considerably low compared to students in other countries like the United States and United Kingdom where students gain genuine interest in programming on their own from a young age,” the Nexon official said.

“Coding is about how you can create a process to ultimately reach a goal, and being able to think on a wide spectrum is more important than learning theories,” said Chung Sang-won, vice president of Nexon and chairman of the event’s organizing committee. “As an information technology company, we will commit our investment to spread the true value of programming.”