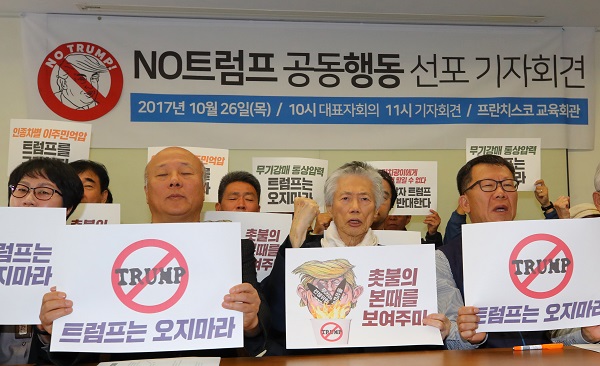 Liberal civic groups are organizing protests of U.S. President Donald Trump’s visit to Korea scheduled for Nov. 7 and 8, less than two weeks away.

In a press conference organized by the Korean Confederation of Trade Unions on Thursday at the Franciscan Education Center in Jung District, central Seoul, the groups declared their opposition to escalation of tensions on the Korean Peninsula by Trump and announced rallies opposing his visit.

Through a “No Trump” joint proclamation, the group expressed opposition to the forcing of arms sales on South Korea and pressure on trade, including Trump’s criticism of a free trade agreement between Seoul and Washington. They also supported the withdrawal of the U.S.-led Terminal High Altitude Area Defense (Thaad) antimissile system and opposed Trump’s policies against immigration and promoting racism.

Some 220 civic organizations, including the Korea Alliance for Progressive Movement, took part in the proclamation.
They agreed to kick off a campaign from Oct. 30 to Nov. 8 protesting against Trump, which includes holding candlelight vigils with the theme “No Trump, No War” on Nov. 4 and 7 in the Gwanghwamun area of central Seoul.

During the state visit, Trump is scheduled to speak to the National Assembly in Yeouido, western Seoul on Nov. 8, and the protesters agreed to hold a rally outside the assembly.

The protesters criticized President Moon Jae-in and the Korean government for inviting Trump on a state visit and to speak at the National Assembly, and “for leading sanctions against the North and not effectively protecting this land’s peace amid Trump’s unrestrained, rash actions.”

Trump, consistent with his America First philosophy, has threatened to walk away from the Korea-U.S. FTA, and also has suggested he would push sales of advanced weapons to South Korea. He has also ramped up unsettling rhetoric against North Korea.

The liberal groups said they would distribute placards opposing Trump’s visit across the city, hold petition drives and promote their activities in major cities and on university campuses.

More moderate progressive civic groups called for a toning down of the “No Trump” slogan, but it was kept.

Some protesters called on the “United States, the greatest nuclear power in the world, to set an example first and halt its hostile policy toward North Korea along with annual military exercises.”

A Korean youth association that called for the impeachment of Trump held a press conference Wednesday in front of the U.S. Embassy in central Seoul, protesting visa rejections by American immigration authorities.

The group of 14 youths, who call themselves the Bangtan Youth Association, said it planned to spend a week in the United States to promote Trump’s impeachment, but were not allowed to board a plane by United Airlines. Earlier this month it announced it would travel to New York, Washington and Los Angeles from Oct. 25 to Nov. 1 to protest against Trump.

The group said since it was not allowed to go to the United States, it will protest Trump’s Korea visit instead.