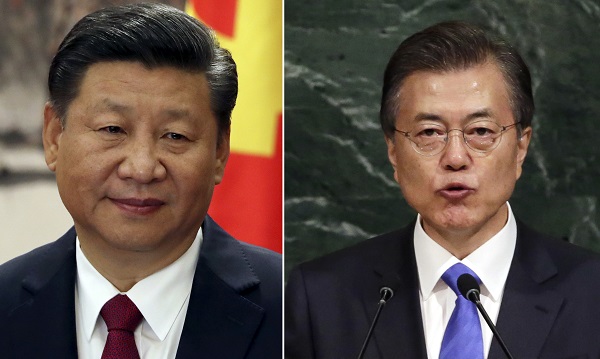 Korea and China will hold a presidential summit next month as a first step to steady a relationship put into a tailspin by Seoul’s decision to host a U.S. advanced antimissile system, the Blue House said Tuesday.

“South Korea and China agreed that President Moon Jae-in and Chinese President Xi Jinping will have a summit next week on the sidelines of the Asia-Pacific Economic Cooperation [APEC] meeting in Da Nang, Vietnam,” said Nam Gwan-pyo, second deputy director of the National Security Office of the Blue House. The APEC meeting is scheduled for Nov. 10 and 11.

Nam said the summit will be the first step in implementing an agreement between Seoul and Beijing, announced by the two countries’ foreign ministries earlier in the morning. “Both sides shared the view that the strengthening of exchanges and cooperation between Korea and China serves their common interests and agreed to expeditiously bring exchanges and cooperation in all areas back on a normal development track,” the agreement said.

The summit between Moon and Xi will, in fact, be the second since Moon took office in May. They had their first meeting in July on the sidelines of the Group of 20 summit.

Nam also said a meeting between Moon and Chinese Premier Li Keqiang™™ is being arranged on the sidelines of the Association of Southeast Asian Nations meetings in the Philippines on Nov. 13 and 14.

Ahead of Nam’s announcement, the Ministry of Foreign Affairs made public the outcome of negotiations between Seoul and Beijing to find a breakthrough in improving relations. Nam and Kong Xuanyou, China’s assistant foreign minister, were the head negotiators.

“Senior officials of the two governments agreed that resolving the Thaad [Terminal High Altitude Area Defense] issue is the precondition to restore bilateral relations,” a senior Blue House official said. “They also agreed that the Thaad issue must be dealt with politically, not through conventional diplomatic means. A political settlement required negotiators who were capable of communicating with the highest decision-makers and speedily adjusting stances.”

Korea-China relations rapidly deteriorated over the past year as Beijing lashed out at Seoul for its decision to host the U.S.-led Thaad antimissile system to deter North Korean nuclear and missile threats. Despite China’s opposition, Seoul and Washington announced the deployment decision in July 2016.

The Korean and U.S. militaries started the deployment in April, installing two interceptors and a powerful radar system in Seongju, North Gyeongsang. Anticipation was once high that Moon, a liberal politician who took office in May after the removal of his conservative predecessor Park Geun-hye, would halt the deployment. He, however, allowed the installation of the remaining four interceptors in September following North Korean intercontinental ballistic missile tests.

Although the Moon administration stressed that the measure was “temporary,” China carried out significant economic retaliation on Korea.

The press statement on the negotiations to restore Korea-China relations addressed the Thaad issue in length. “Korea took note of China’s position and concern regarding the Thaad issue,” the statement said. “Korea made it clear that the system is, pursuant to the original purpose of its deployment, not directed at a third party and thus does not undermine China’s strategic security interests.”

While Seoul and Washington said the system is meant to deter North Korean threats, Beijing said its powerful radar can spy on Chinese territory.

“China reiterated that it opposes the Thaad deployment in Korea to protect its national security,” the statement said. “At the same time, China took note of the position stated by Korea, and hoped that Korea would deal with related issues appropriately. The two sides agreed to engage in communication on Thaad-related issues about which China is concerned through communication between their military authorities.”

The press statement also noted that China addressed three other security issues: the establishment of a U.S.-led missile defense regime, additional deployment of Thaad equipment and military cooperation among Korea, the United States and Japan. China has suspected that the Thaad deployment was the first step in Korea’s participation in the U.S. missile defense regime, which would lead to the eventual formation of a regional military alliance similar to that of the North Atlantic Treaty Organization.

The Moon administration assuaged China about those three concerns. Defense Minister Song Young-moo and U.S. Defense Secretary James Mattis made clear on Saturday in a joint communiqué after security consultation that the Thaad deployment is “provisional” and the system “would not be directed toward any third party nations.”

Secondly, Foreign Minister Kang Kyung-wha told the National Assembly on Monday that Korea has no intention to participate in a U.S.-led missile defense regime and is focusing on building its own missile shield.

She also said Seoul is not considering additional Thaad deployment and pledged that security cooperation among Korea, Japan and the United States will not evolve into a trilateral military alliance.

The breakthrough in strained Korea-China relations will add momentum to Moon’s larger diplomatic goals. Sources said the government wants to arrange a visit to China by Moon before the end of this year and a visit by Xi to Korea early next year to attend the PyeongChang Winter Olympics.

If China responds positively to the plan and persuades North Korea to send athletes to the Olympics in South Korea, the administration may be able to find a breakthrough in frozen inter-Korean relations, sources said.

“Moon thinks it was unfortunate that the inter-Korean summit of Roh Moo-hyun [in 2007] took place at the end of his presidency,” a government official told the JoongAng Ilbo.

“He, therefore, has a strong will to turn around the situation during the early months of his presidency, using the PyeongChang Winter Olympics as an opportunity.”

Moon traveled to Gangwon on Tuesday to attend a conference of the National Unification Advisory Council, hosted at the Gangneung Ice Arena, a venue for Olympic figure skating and short-track speed skating.

The press statement Tuesday also said Korea and China will work together to promote diplomatic resolutions to the North Korean nuclear issue and enhance strategic communications and cooperation.
Criticism, however, arose that the government caved to Beijing.

Conspicuously missing in the press statement was any mention of China’s economic retaliations and damages suffered by the Korean economy from a ban on group tours and its entertainment and cosmetic companies.