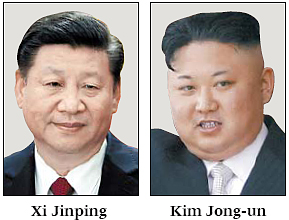 Chinese President Xi Jinping called for sound and stable ties between Beijing and Pyongyang in a message to the regime’s leader Kim Jong-un, according to North Korean state-run media Thursday.

“I wish that under the new situation the Chinese side would make efforts with the DPRK [Democratic People’s Republic of Korea] side to promote relations between the two parties and the two countries to sustainable soundness and stable development,” Xi said in the message dated Wednesday, according to the North’s official news agency Korean Central News Agency (KCNA), “and thus make a positive contribution to… defending regional peace and stability and common prosperity.”

Xi was responding to a congratulatory message sent by Kim for the successful conclusion of the 19th National Congress of the Chinese Communist Party last week, and expressed his “sincere thanks” to the North Korean leader.

He went onto wish the North Korean people success in the “cause of socialist construction” under the leadership of Kim Jong-un.

Through the party congress, which comes every five years, Xi cemented his grip on power, emerging as possibly the strongest Chinese leader since Mao Zedong.

In a short message on Oct. 25, Kim wished success to Xi and called for relations between North Korea and China to “develop in the interests of the peoples of the two countries.”

Xi’s message was also published on the front page of the North’s official Rodong Sinmun Thursday and comes as ties between North Korea and China have become more strained as Beijing partakes in international efforts to sanction the regime for its nuclear and missile weapons tests and threats.

Kim’s message was considered to be terser than previous ones, reflecting a coolness between the two governments. In the same way, Xi’s message to Kim Wednesday included cautionary terms, such as “defending regional peace and stability.”

The two leaders have yet to meet.

Kim last received a congratulatory message from Xi on July 11, 2016 - 16 months ago - to mark the 55th anniversary of the Treaty of Friendship, Cooperation and Mutual Assistance between North Korea and China. It said the two countries planned to boost strategic understanding, promote exchanges and cooperation and continue to develop bilateral relations.

In June 2016, North Korean senior envoy Ri Su-yong headed a large-scale delegation to Beijing and personally delivered a message from Kim to Xi expressing the desire to bolster traditionally friendly relations between the two countries and explaining the results of the Workers’ Party’s seventh congress the previous month.

Xi’s message comes days ahead of U.S. President Donald Trump’s first trip to Asia, which includes stops in Japan, South Korea and China. Trump, who visits China from Nov. 8 to 10, is expected to pressure Beijing to do more to rein in North Korea and push for a better balance in trade.

It also comes as Seoul and Beijing agreed to put bilateral relations back on a “normal track” after a year-long freeze over the deployment of a U.S.-led Terminal High Altitude Area Defense battery in South Korea.

Analysts have pointed out that China is in an awkward position as North Korea continues to launch ballistic missiles and conduct nuclear tests - its latest and most powerful one to date on Sept. 3 - and Washington is demanding Beijing to use more influence on its neighbor.

As its relations have become more strained with China, North Korea has been cooperating more with Russia recently.

“Pyongyang and Beijing relations have become estranged as China has taken part in the international community’s sanctions against North Korea led by the United States,” a government official in Seoul pointed out, “and the exchange of messages on the occasion of the Chinese party congress can serve as an occasion to restore bilateral relations.”

North Korea expert Chin Hee-gwan, a professor at Inje University, told the JoongAng Ilbo Thursday that while Pyongyang and Beijing share an extremely intimate relationship, “The recent congratulatory message and response shows indications of restoration of relations, but the contents show that the usual emphasis of traditional friendly relations is missing. We will have to continue to watch for North Korea’s further provocations or China’s response.”