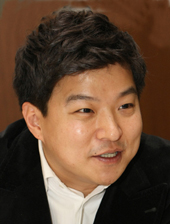 Comedian Kim Saeng-min has signed an exclusive contract with SM C&C, according to the agency on Friday. Many popular television personalities such as Shin Dong-yeob, Kang Ho-dong and Jeon Hyun-moo are part of the agency.

In a written announcement the agency said, “We will try our best to support Kim’s dream of being a beloved celebrity for a long time.”

Kim made his debut as a comedian on KBS in 1992, and has been the host of KBS2’s entertainment news program “Entertainment Weekly” for 20 years. He has also been a part of SBS’s “TV Animal Farm” for the past 17 years.

Recently, he has become popular with his podcast “Kim Saeng-min’s Receipt.” On the show, he analyzes the consumption patterns of listeners who turn over their receipts to the host. The show’s unique concept has drawn a great deal of attention and the host is currently in talks with KBS to develop the podcast into a television series.