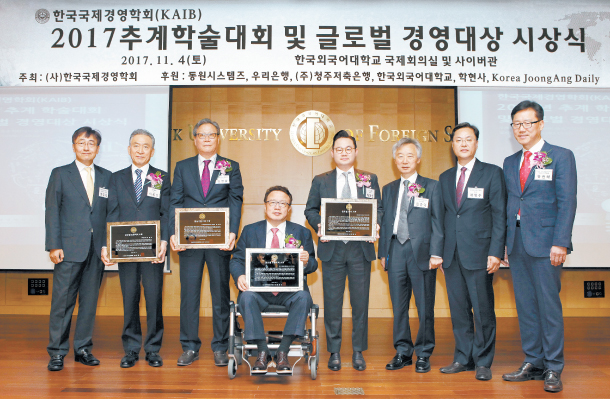 Since 2002, the academy has recognized domestic companies that performed well overseas. Awardees in the past were mainly affiliates of conglomerate or local offices of foreign brands. This year the awards focused on companies that started as local small or medium-sized enterprises to grow into global “champions.” The Korea JoongAng Daily supported Saturday’s event.

“It takes so much work and sacrifice for small local companies to grow into hidden champions strong enough to compete in the global market,” said Chae Myung-su, President of the Korean Academy of International Business and a marketing professor at Hankuk University of Foreign Studies’ Graduate School of Business. “We wanted to shed more light on them.”

The four awards given out Saturday were grand prizes in different categories: Global CEO, Global Frontier and the Hansang Company CEO. The word Hansang in Korean indicates companies that were established by a Korean entrepreneur but are based in a foreign country.

Chang Sung Group won the Global CEO award given to companies regardless of size assessed to have contributed to elevating the global perception of the competitiveness of Korean companies.

Chang Sung has over 20 foreign offices and generates 60 percent of its sales from exports.

Since 1980, the company has been a prominent manufacturer metal powder, a base material for making components and parts used in a wide variety of industries from smartphones to shipbuilding. Before Chang Sung, all of metal powder used by Korean companies was imported from overseas.

In the following decades, the company expanded its business to include metal materials and inverters used with eco-friendly energy generators including solar and wind power stations. In 2009, it also established an affiliate for construction and land development, building resorts, hotels and office complexes. The company expects that sector to generate 200 billion won in sales this year.

The Global Frontier CEO award was shared by AND Korea and PPI Pyungwha. This prize is given to SMEs that showed notable performances in the global market.

AND Korea is a producer of industrial measuring instruments used in petrochemicals, cement, steel and glass manufacturing. The company was originally established in 1986 and later became a local affiliate of Japan’s A&D Company, one of the top three global leaders in the industry alongside Switzerland’s Mettler and Germany’s Sartorius.

A major contribution AND Korea made in the domestic market is developing the strain gauge-a core component in electronic scales. This device, which used to be imported from the U.S. and Europe, detects the amount of physical pressure put on a scale and converts it to electronic signals.

The company developed products using its know-how in scales. AND Korea currently exports to over 50 countries and annually has 64.5 billion won in sales.

PPI Pyungwha is a manufacturer of plastic water pipes. It was one of the first Korean companies to go into such a business when it was established in 1976.

Its most prominent product is the Appiz Water Pipe developed in 2013 after eight years of research. Cast-iron pipes and polyvinyl chloride pipes, also known as PVC pipes, are the two dominant types of water pipes. They each have limits: cast-iron pipes rust or corrode and PVC pipes frequently break.

PPI’s Appiz pipes have been proved to be stronger and last longer than conventional water pipes. One experiment showed that a Appiz pipe remained undamaged after a 30-ton excavator ran over it four times. A research team from Texas State University proved that the pipes were durable for 100 years, much longer than cast-iron or conventional PVC pipes.

Last year, PPI signed a contract with American Water, the largest public water provider in the U.S. to replace some of the American company’s old water pipes.

The Hansang Company CEO award went to PT SungChang Indonesia, one of the biggest wig manufacturers in the world, a company that runs eight wig factories across Indonesia.

President Kim Young-yool started as a wig designer in the late 1960s, when the Korean wig business was at its peak. Three decades later, Kim built a wig factory in Indonesia, which offered cheaper labor. SungChang’s eight factories in Indonesia employ 17,000.

Its products are sold in 10 countries including Japan, Korea, Europe and the U.S. It generated $85 million from exports last year and has 35 percent of the global market share for natural wigs.

Established in 1989, the Korean Academy of International Business is comprised of around 600 academics that conduct research in companies’ global competitiveness, foreign direct investment from Korea and attracting investment from abroad.