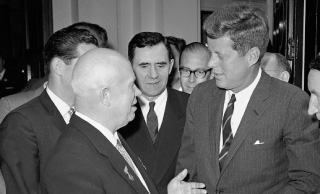 The B-1B Lancer, the main strategic bomber of the United States, flew over the Korean Peninsula in September and October. While it had passed over the Korean Peninsula before, it approached as far north as 350 kilometers (217 miles) from Wonsan, Gangwon, in North Korea in September. The strategic bomber flew beyond the demilitarized zone and the closest to the North that it has ever flown in the 21st century.

The B-1B Lancer can be loaded with up to 60 tons of bombs, such as nuclear weapons. It can be equipped with as many as 24 AGM-158 Jassm cruiser missiles, which have a 370-kilometer range. In other words, the strategic bomber can strike the North without going into the territorial air and waters of North Korea. If North Korea had mistaken the operation as a surprise attack and made a military response out of panic, it could have escalated to a dangerous situation.

South and North Korea and the United States have the “reciprocal fear of surprise attack,” which means the enemy may attack first if it feels threatened, and vice versa. The winner of the 2005 Nobel Prize in Economics, Thomas Schelling, wrote about this in his 1960 book “The Strategy of Conflict.”

The notable case of “reciprocal fear of surprise attack” was the Cuban Missile Crisis in 1962. When the tension for a nuclear war was at its peak, a U-2 spyplane was in Cuban air on a reconnaissance flight on Oct. 27, and a Soviet commander in Cuba shot it down with a surface-to-air missile. The missile launch was made without the permission of the Kremlin in the Soviet Union. Then the Soviet defense minister, Rodion Malinovsky, reprimanded the air force commander for being hasty. While the U.S. Department of Defense proposed a retaliatory attack, President Kennedy did not approve.

Coincidentally, on the same day, a U-2 was lost in Soviet air space in Siberia. The Soviet’s Mig fighters responded to shoot it down. Fortunately, the U-2 managed to escape. Then Soviet leader Nikita Khrushchev considered it a reconnaissance mission by U.S. forces to attack the Soviet Union. It could have led to a serious war. However, Khrushchev must have thought that they would not be able to deter the attacks by the United States and did not make further military provocations. At the brink of a war, the two leaders displayed courageous patience and prevented World War III.

U.S. President Donald Trump is visiting South Korea on Nov. 7. His words and actions can elevate or ease tension on the Korean Peninsula. He has already shown with the B-1B Lancer that strong aggressiveness can secure safety better than passive prudence. Now, he has to reduce reciprocal fear of surprise attack with the North Korean Chairman of Defense Commission Kim Jong-un. Let’s hope for a bold message of peace during his visit.