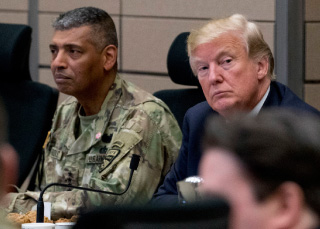 On Nov. 5, Donald Trump and Shinzo Abe played golf at Kasumigaseki Country Club. The private club does not allow Korean-Japanese as members. Until last March, women were also prohibited from becoming full members. The course symbolizes the culture of exclusivity in Japan. The course is actually pretty rough and has 130 bunkers in 18 holes, so it is not easy for an average golfer to finish a round with good grace.

However, there is a reason why Abe, an intermediate golfer, wanted to play there. He wanted to publicize the course where golf competitions will take place for the 2020 Tokyo Olympic Games. The Tokyo Olympics are the keystone of Abe’s grand ambition for long-term power. This shows that Abe shamelessly pursues his goals in every way he possibly can.

Trump’s visit to Japan was a demonstration of almost extreme hospitality. The climax was how Abe waited for Trump’s daughter Ivanka in front of a restaurant for 13 minutes. Koreans would criticize such behavior as overmodest. However, it is hard to find such opinions among the Japanese people or its media. They don’t see a servile attitude where we would.

Naturally, different countries have different sensibilities. But people like to be treated nicely. Perhaps we should not underestimate the hospitality and the over-the-top welcome for Trump and Ivanka that Abe and the Japanese people gave. The affection that Japan shows for the United States could translate into something good for Japan. Diplomacy requires give and take. Trump surely has problems with Japan. But throughout his visit, he kept them entirely to himself.

Lately, the Korea-China relationship has seen some changes. China has stopped its retaliations for Korea’s deployment of a U.S. missile shield without the slightest hint of an apology or expression of regret. Still, the Korean government welcomes improved relations and offered the so-called “three no’s” to Beijing: no additional Thaad deployment, no joining of a broader U.S. missile defense system and no Korea-U.S.-Japan military alliance.

We offered China a reward even after suffering its retaliations for the Thaad deployment. Why should we tell China that there will never be a military alliance among Korea, the United States and Japan? Because of Seoul’s ambiguous stance, Beijing has repeatedly showed the arrogance of having President Moon Jae-in’s special envoy sit in a lower seat at a meeting in Beijing. Moreover, Moon backtracked on his position in a joint statement between Moon and Trump after a June summit in Washington by stressing South Korea’s role as a “diplomatic balancer” between Washington and Beijing. Despite its rhetoric, Seoul could lose its ally, the United States, and a friend, Japan.

Trump will spend about 25 hours in Korea. Koreans by nature would not be able to offer golf diplomacy or the kind of effusive welcome he saw in Japan. However, we can treat him with sincerity and without betraying our principles. Some anti-American protesters may act up. On the chemistry Trump enjoys with other leaders, former U.S. State Department special adviser Robert Einhorn said the best was with Abe, the chemistry was moderate with Xi and distant with Moon. Trump’s Asian tour could widen the gap.

For the Asian tour, Trump changed the term Asia-Pacific to Indo-Pacific. The concept comes from Abe’s 2006 book “Toward a Beautiful Country” as a 3+1 strategy of Japan-Australia-India + the United States. This is a plan to form solidarity among four marine powers against the continental power of China and North Korea. Where is South Korea’s place? On his trip to Korea, Trump was looking for an answer.