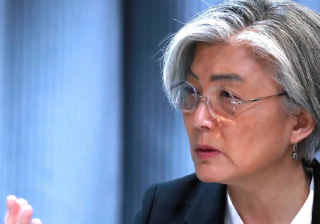 Fortunately, the discord between Korea and China has ended after nearly a year and half. How could China agree to improve relations without addressing Thaad, when it insisted that there was no other way than the withdrawal of the radar system?

Some say that Korea got what it wanted while China saved face. Foreign minister Kang Kyung-wha made the so-called “three no’s;” no additional Thaad deployment, no use of further missile defense systems, and no Korea-U.S.-Japan military alliance in order for China to save face.

Does China think that it only saved face? Probably not. The government has made no behind-the-scenes agreement or a promise for China’s demands. But I find it hard to believe that.

First, let’s look at the circumstances. While Kang answered lawmaker Park Byeong-seug’s questions at the National Assembly a day before the agreement was announced, Park referred to the “three no’s” perfectly. It seems that someone tipped him off to the agreement, and I suspect that the question and answer were arranged.

The second is the contents of the answer. The agreement only lists three of China’s concerns and does not say “no.” China expressed concerns, which Korea took carefully, and the agreement does not specify how they would be dealt with. The model answer of the foreign ministry would be, “We understand China has concerns. We are working to clear concerns and improve relations through close communication.” However, Kang answered with three clear “no’s.”

It seems that Korea cannot accommodate China’s demand to document the three no’s, so there must have been a compromise. The change in Beijing’s attitude after Kang’s remarks makes it more evident. Yang Xiyu, senior fellow at the China Institute of International Studies under China’s foreign ministry, said Korea expressed the will not to be restrained by the United States, and China’s biggest strategic concern over Thaad has been cleared. China seems to treat the “three no’s” not as a way to save face but as an issue directly related to China’s strategic interests.

In other words, China revealed its strategic perspective through the agreement process.

In the strategic rivalry with the United States and its allies, China weighed Korea-China relations and Korea-U.S. relations and played hard to get. There must be fundamental changes between the good relations in the early days of the Park Geun-hye administration, the freezing of relations over the Thaad issue and the thawing season that has finally arrived. This is the most valuable lesson that Korea has learned after paying a high price through the discord over the Thaad system.