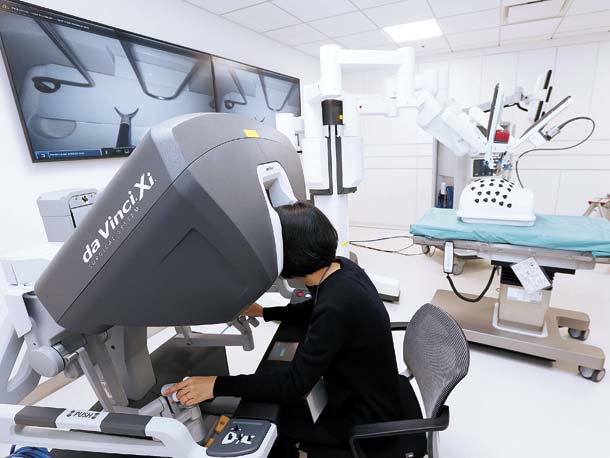 Intuitive Surgical, a major American manufacturer of medical robots, opened a new training and demonstration center in Seoul on Tuesday as the company expands its foothold in Korea and hopes to engage more doctors in robot-assisted operation.

The Center for Surgical Innovation in Sangam-dong, western Seoul, will train doctors in robot-assisted surgery using the company’s proprietary system da Vinci. But the space is not limited to just health professionals as it is equipped with rooms where the public can experience and learn about the medical robot system.

The new center adds to two already existing training centers at the Asan Medical Center in Songpa District, southern Seoul, and Severance Hospital in Sinchon, central Seoul. The three centers reflect Intuitive Surgical’s focus on developing the Korean market as it only runs two training centers in the United States and one in Japan.

“We find something here you do well,” he said during a media event at the center, “drive and interest by Korean surgeons to create better outcomes not just for Korean patients but patients around the world.”

The center is part of an agreement that the company signed with the Seoul Metropolitan Government to invest 10 billion won ($9 million) in the city over the next three years. About 70 percent of the investment was spent on building the new center, said Son Seung-Wan, head of Intuitive Surgical Korea. In exchange, the city has agreed to provide “administrative support.”

“Intuitive Surgical Korea has collaborated with distinguished clinicians in Korea since it entered the country in 2012,” Son said. “Today, we have produced a meaningful achievement through the Center for Surgical Innovation.”

The Sangam center will feature seven da Vinci surgical systems, two demo rooms and conference rooms fitted with remote communications platforms so that professionals outside of Seoul can collaborate in training.

Intuitive Surgical is based in Sunnyvale, California. The Nasdaq-listed company invented the da Vinci robotic surgery system that gives surgeons access to small organs in difficult-to-reach parts of the human body.

The robot can perform complex operations on the prostate, uterus, cervix and heart.

Intuitive Surgical said the most common type of surgery done by its robot system in Korea is urological surgery.