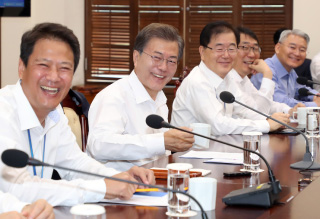 The liberal Moon Jae-in administration wants to promote “life with breaks” in the government and in society in general. [YONHAP]

When I was a Blue House correspondent during the Lee Myung-bak administration, I heard staff complaining of “no holiday, early bird” fatigue. Many of them went to work very early — sometimes only a few hours after they went home. I thought the staff was overworked because the administration had an overly rigid work philosophy. Ministry officials complained that they had to report to work on weekends even when there was little work to do because the president forced diligence and pushed unreasonable demands.

Then I was posted as a Washington correspondent and realized the White House was even busier under the Obama administration. As the White House Chief of Staff began his day at 5:30 am, his staff had to begin preparing hours before. A spokesman from the George W. Bush administration said that he arose ready for work at 4 a.m. every morning. President Bill Clinton stayed in his office until 10 p.m., and his staff couldn’t conceive of leaving earlier.

In the Blue House under the liberal Moon Jae-in administration, an announcement is being made at 6 p.m. on Wednesdays urging staff to leave. Getting off work on time and using annual leaves will be reflected in their performance evaluations. Moon wants to establish a “life with breaks” culture in the public community and in society in general. But I wondered how they could afford to leave on time when there is so much work to do to clean up messes left by the previous administration.

The Blue House and the White House are special institutions. They are gatekeepers that cannot let the tension slacken off at any moment. In any organization, there should be a heart that is pumping 24 hours. Working at the heart of such an organization is a golden time in anyone’s career.

I don’t mean that public servants should work until they are worn out. Moon rightfully promised to end the culture of overworking for the sake of looking good. Those in leadership positions must get busier, but they still want staff to leave work on time. They also want the people to know that they are different from the “staged” diligence of the Blue House under the past two conservative administrations.

The Blue House made the schedule of the president public for the first time in history. But schedules like “cabinet briefing on current issues” sound a little too vague. It was hard to see the whereabouts of the president for security reasons and the public disclosures lacked some events that were reported in the media. In the United States, people can see who the president is playing golf with on weekends. In Japan, it is reported in newspapers where and with whom the prime minister had dined.

Moon said all 24 hours of the president’s day should be information given to the public. He promised to release his schedule because his predecessor Park Geun-hye was not accounted for in the seven hours after the Sewol Ferry capsized and still refuses to verify what she did during that critical time. The Blue House Chief of Staff, Im Jong-seok, said that it was 7 hours and 30 minutes, not 7 hours, that Park was “missing.” If the vague explanation of Moon’s schedule is all the Blue House can provide, it should retract its promise to make the 24 hours of the president public. The Blue House seems to be overly eager to distinguish itself from the Lee Myung-bak and Park Geun-hye administrations.

It is right to correct wrongs. The Park Geun-hye administration was condemned for making appointments from names listed in her personal notebook. In the current administration, key appointments went to people who worked on Moon’s campaign. Moon’s nomination of Hong Jong-haak, one of his campaign aides, was criticized because of Hong’s alleged tax evasion. The Blue House is trying to show that it is different from the Park and Lee administrations, but broadcasters and public corporations are still considered trophies. It was similar at the beginning of previous administrations.