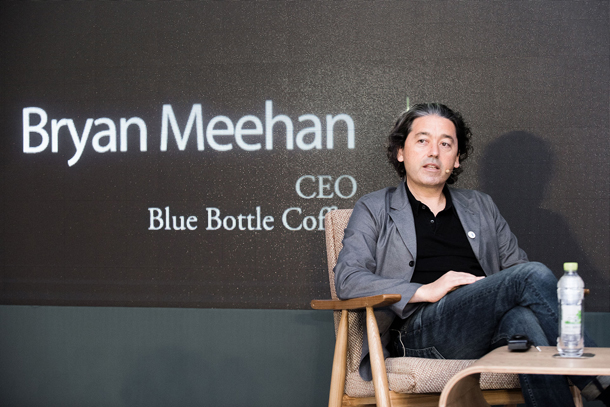 Blue Bottle Coffee, a California-based artisanal coffee maker, is laying the groundwork to open its first branch in Korea soon.

“I came here 18 months ago to develop contacts here,” said Bryan Meehan, CEO of Blue Bottle Coffee, on Thursday at a session held at the Seoul Cafe Show at COEX in southern Seoul. The show will run until Sunday.

“I am taking into account of the support that Korean market has shown for the Blue Bottle. I see that in terms of click numbers where Korea is among the highest. We know we are well-received here,” Meehan added.

Blue Bottle Coffee was founded in 2002 in Oakland, California by James Freeman, a former clarinetist who had an ardent passion for freshly brewed coffee.

With a firm belief that beans should finish roasting and be brewed within no more than 48 hours, Blue Bottle Coffee soon emerged as an iconic brand among trend-sensitive coffee aficionados. Due to its high-end product with a focus on precision, it is often dubbed the “Apple of coffee.”

The slow-drip pour-over coffee company raised more than $120 million in funding from some of the most prominent companies and figures in the tech industry including Instagram CEO Kevin Systrom and GV, a venture capital arm of Google.

Despite the explosive popularity, Blue Bottle’s expansion has been slow in terms of the number of locations, currently operating some 50 stores in the U.S. and Japan. It was only in 2015 that Blue Bottle finally decided to open an overseas branch in Japan.

Despite a number of Korean food and beverage operators reportedly trying to strike a deal with the coffee maker, Blue Bottle is determined to launch here on its own terms.

“When we launch here, [it will be similar to] what we did in Japan,” the CEO said. “We got a lot of requests to do joint ventures and [issue] licenses. But we are very passionate about controlling quality. We like to do things by ourselves. We’ve never franchised in our lives. It is not a model that we know,” Meehan added.

The date that Blue Bottle Coffee will arrive in Korea was not revealed at the session, but Meehan did make it clear it was not going to be in the next month or two.

When asked about how Blue Bottle will contend with Starbucks, a dominant player in the local coffee market, Meehan said they differ in terms of value that they provide to the customers.

“Starbucks is a great facilitator of milk-based espresso drinks which Koreans like. We think we can survive side by side. People who want convenience will approach Starbucks. People will come to Blue Bottle looking for in terms of great taste,” Meehan said.