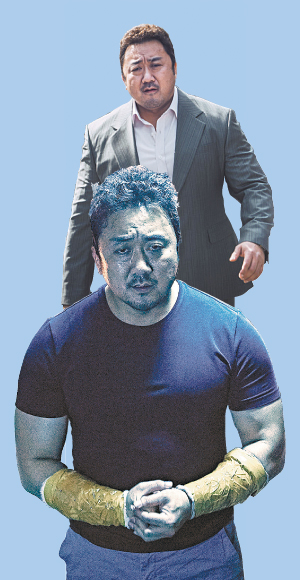 Ma Dong-seok, one of the most successful actors in Korea, has played tough characters in “Train to Busan,” above, and “The Outlaws.” [MEGABOX PLUS M, NEXT ENTERTAINMENT WORLD]

In the Korean entertainment industry, it is commonly said that a movie without Ma Dong-seok can barely succeed. One look at this week’s local box office proves that the 46-year-old actor has the magic touch.

Ma’s latest comedy “The Bros” knocked Marvel’s almighty “Thor: Ragnarok” off the top of the box office on its opening day and came in second last weekend. At the same time, his crime action flick “The Outlaws” managed to land at third in its fifth weekend.

In “The Outlaws,” Ma plays a police detective who is on the hunt for a merciless gang boss played by Yoon Kye-sang. The actor’s thick arms and the gigantic build give off an intimidating look, and audiences connect with him the way they would with a superhero.

Of the movies that competed against “The Outlaws” during the long Chuseok holiday early last month, including period epic “The Fortress” and the heartwarming drama “I Can Speak,” the crime action flick performed the best.

As of Wednesday, the film has sold 6.48 million tickets in total, and has surpassed “The Man from Nowhere” (2010) to become the third best-selling R-rated movie in Korea.

The more recent “The Bros” showcases Ma’s ability to pull off comedy and shows the action hero in a new light.

Ma Dong-seok showed off his ability to pull off humorous characters in “The Bros,” above, and “Familyhood.” [MEGABOX PLUS M, SHOWBOX]

The movie centers on the senseless Seok-bong, played by Ma, who is always buying high-end equipment that he can’t afford in order to discover valuable artifacts, and his smarter, down-to-earth younger brother, played by Lee Dong-hwi, who is at risk of getting fired from a construction firm.

The story unfolds after the two, who have grown apart, meet after a long time in their hometown of Andong, North Gyeongsang, after their father’s death. The duo’s teasing and bullying, as well as Ma’s silly reactions, bring the laughs throughout the movie.

The film, which was the most-watched movie at the box office on Tuesday and Wednesday, has sold a total of 928,000 tickets as of Wednesday.

Before Ma shot to stardom, he often played gang members or loan sharks - characters that fit his threatening, muscular body, but didn’t leave a strong impact on the audience.

But the actor was able to break out of the roles he had been playing to become a righteous, friendly hero, thanks to the films he has worked on over the past few years.

His roles have endeared him to a wider audience, who have embraced the actor’s likable personality.

Ma’s role in last year’s runaway hit “Train to Busan” as a righteous tough man courageously fighting against hundreds of zombies to save his pregnant wife and the rest of the passengers on the train, as well as his role as a delicate fashion designer who works as the loyal manager of a washed-up actress in comedy “Familyhood” (2016) were pivotal in recreating the actor’s image, according to movie critic Hwang Jin-mi.

“Through movies like ‘Train to Busan’ and ‘Familyhood,’ Ma has effectively proved, especially to women, that he is not an intimidating person that will hurt people,” said Hwang.

“In ‘Train to Busan,’ Ma fights off zombies with his bare fists to protect his pregnant wife, while in ‘Familyhood,’ he plays a character who willingly chooses to do tedious chores as the manager of an actress when he has a good enough degree to land a more lucrative job.”

The depiction of Ma as the sweet CEO of cosmetic brand Etude House in a commercial for the company last summer also expanded his appeal beyond his image as a big muscled protector, added Hwang.

Another movie critic, Oh Dong-jin, says that Ma’s immense popularity is derived from the movie audiences’ desire to see a righteous and friendly superhero on screen, which has been an uncommon character in recent local films.

“His movies are liberating and provide a sense of thrill that comes with righteousness,” said Oh.

Culture critic Kim Heon-sik sees the actor’s popularity as a reflection of the public’s desire to see something authentic on screen.

“In the wake of the Choi Soon-sil scandal, people want to see something that isn’t fabricated. Ma’s characters speak directly and often use slang, which isn’t the typical kind of hero seen in local hero movies of the past, like 2010’s ‘The Man from Nowhere,’ where the hero [played by Won Bin] speaks in a refined manner.”

Thanks to his popularity, Ma will be featured in four new movies in the coming months, which showcase his dynamic abilities as an actor. He will play a god in “Along with the Gods: The Two Worlds,” a wifeless judo instructor in “Wonderful Ghost” (working title), a high school P.E. teacher investigating a case of a missing student in “Gomtaengi” (working title) and a former arm wrestler attempting to make a comeback in “Champion” (working title).