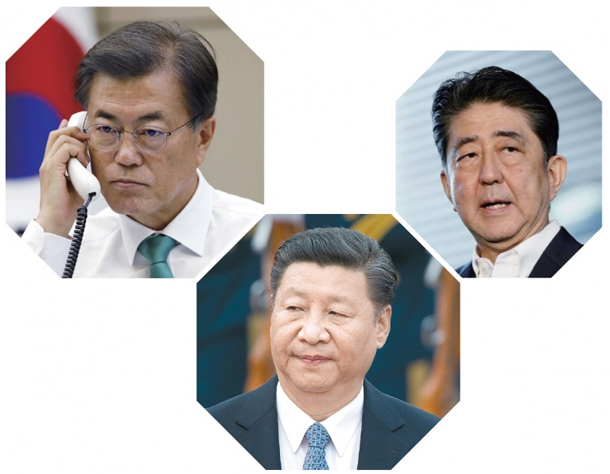 U.S. President Donald Trump’s visit to Seoul has garnered the most attention since Korea became economically prosperous. It is only fair considering the serious security situation. Fortunately, there hasn’t been an unexpected incident that people had worried about. Korea’s reception of the guest was on a par with Japan and China.

I am curious what Trump and Abe talked about as they played golf, but the luncheon that President Moon and President Trump had with Korean and U.S. troops was symbolically significant. China gave imperial treatment by hosting Trump in the Forbidden City, but the detail of serving “Dokdo Shrimp” was very clever. The biggest result of Trump’s visit was that there was no disharmony. It is fortunate that the worst didn’t happen. Here, I have a question, “What is Asia doing?”

The U.S. media rubbed it in. After President Trump left Japan, the Washington Post called Abe “Trump’s loyal sidekick.” After the visit to Korea, the Wall Street Journal rudely wrote that the Korean president may be an “unreliable friend.” China should be ready for insults as well. No matter how cordial the hospitality was, the United States, in and out of the government, is not likely to be favorable towards China.

Nevertheless, Korea, Japan and China are competing in diplomacy with the United States. Coincidentally, President Trump’s visit to the Demilitarized Zone was cancelled due to fog and yellow dust from China. It was due to bad weather, but it resembled the Northeast Asian situation. Here, I once again have to ask, “How about Asia?”

The Trilateral Cooperation Secretariat (TCS) is located in Gwanghwamun, central Seoul, which Trump drove by. It was established in 2011, jointly funded by Korea, China and Japan. Some hoped for an “East Asian economic bloc.” At any rate, the objective was to institutionalize cooperation. But when crisis took place, institutionalization was distant, and real powers were closer. Soon, it was revealed that Asia has little capacity to resolve its own issues. The three countries have about 20 ministerial meetings a year with little outcome. So, I must ask again, “What is Asia up to?”

Considering economic power, no other region is as incompetent on its own issues as Asia. Wars always happen. Europe was in a war for 100 years, but it accumulated the experience of diplomatic resolutions within the region. The United States created the order of coexistence with its superpower.

But Asia remains helpless, and conflicts and trade disputes still exist. Korea, China and Japan seem to have forgotten about the TCS, and the Asean is in name only as it celebrates its 50th anniversary. On security issues, no one can answer the question about the lack of an Asian NATO even at the height of the so-called Asian century.

Leaders of Asia gather in the Philippines next week. Hopefully, the capacity to resolve regional issues will improve. Otherwise, the same question will continue. “What is Asia doing?”