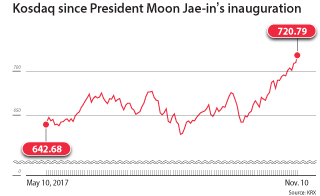 The bullish global market since the launch of the Moon Jae-in administration has propelled the Kospi and Kosdaq up by more than 12 percent, according to the Korea Exchange and Korea Financial Investment Association on Sunday.

Thanks to the upbeat market performance, the value of mutual funds, which invest in stocks as well as some other products in varied markets across the globe, also grew. The net value of funds excluding private equities totaled 525.55 trillion won as of Nov. 8, up 3.8 percent from May 10. Those equity funds that move specifically in tandem with the Korean stock markets shot up 13.9 percent to 77.9 trillion won between May 10 and Nov. 8. Over the same period, investors in Korea injected over 1.5 trillion won of their properties into equity funds run by either Korean or foreign entities.

The net assets of real estate funds and derivatives each grew 6 trillion won and funds also saw their value increase 5.3 trillion won during the six-month period.

On the other hand, bond funds saw their net value shrink more than 2.7 trillion won as interest rates in key markets including the United States are expected to rise. The Fed committee expects to raise borrowing costs once this year and follow up with three additional raises next year. The Bank of Korea left its key interest rate unchanged at 1.25 percent on Oct. 19 but its governor Lee Ju-yeol hinted it was time to raise interest rates, which have been at a record low for 16 consecutive months - a record stretch with no change.

Analysts forecast an additional surge for the Kosdaq as the Moon administration recently unveiled plans to revitalize the ecosystem for innovation-centered firms and is expected to come up with measures to overhaul the capital market consisting of small-cap shares sometime in December.

“Moon’s upcoming Kosdaq stimulating policies are set to become the most powerful ones in history,” said Noh Dong-kil, an analyst with Shinhan Investment Corporation. “They are expected to prop up the Kosdaq’s rise.”

There is a high chance the Kosdaq could go as high as 788.13, posted during the July 21, 2015 trading, which was the highest since the index slumped in the aftermath of the 2007-2008 financial crisis, analysts say.