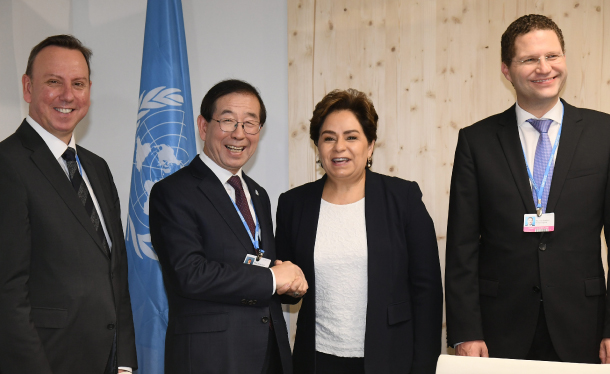 BONN, Germany - Seoul Mayor Park Won-soon requested the assistance of the United Nations Framework Convention on Climate Change (Unfccc), which hosts the Conference of the Parties (COP), in establishing an international organization to combat air pollution in East Asia.

“Improvement to air quality is an issue that is as important as emission cuts,” Park told Unfccc Executive Secretary Patricia Espinosa on Saturday at a meeting in Bonn, where the 23rd COP to Unfccc is taking place from Nov. 6 to 17, “especially because Seoul is greatly affected by the fine dust flying in from China, the improvement to air quality in Seoul requires city-to-city cooperation.

“For this, Seoul hosts the Northeast Asia Forum on Air Quality Improvement,” Park said, “and we would like the Unfccc to take part and assist us in running the forum.”

The Seoul Metropolitan Government plans to turn the annual Northeast Asia Forum on Air Quality Improvement, hosted in Seoul since 2010, into an international body through which participating countries and cities can coordinate their policies to combat air pollution.

There were 259 days last year when the air quality was rated “bad” in Korea, meaning fine dust particles smaller than 2.5 micrometers in diameter, or PM 2.5, exceed 50 micrograms per cubic meter of air. In 2016, there were 258 such days.

Espinosa agreed that improvement to air quality is an issue that is very close to the heart of the international community and that Unfccc would be happy to coordinate with Seoul on this matter if possible. She also stressed that combating climate change cannot yield concrete results without city-to-city coordination in policies and added that Unfccc is coordinating closely with International Council for Local Environmental Initiative (Iclei), a network of local governments from 89 countries established by the United Nations in 1990 to discuss and share knowledge and practices on global environmental issues.

Park on Saturday also discussed policies on sustainable procurement of goods with other cities at the third general meeting of the Global Lead City Network on Sustainable Procurement (GLCN) in Bonn. The GLCN was established by Iclei in 2015, when Seoul hosted the organization’s general assembly. Seoul is the president city of GLCN from 2015 to this year.

“We need to take a hard look at whether our production and consumption patterns are truly sustainable,” said Seoul Mayor Park Won-soon in addressing some dozens of city and local government representatives. “Leaders of cities around the world convened in Seoul in April 2015 and agreed to launch a network of cities committed to 100 percent sustainable procurement, based on green purchasing .?.?. [and] member cities have actively engaged in the sharing of best practices in sustainable procurement with fellow cities over the past 2 years.”

Seoul and member cities, including Helsinki, Ghent and Tshwane, emphasized the role of local governments in promoting sustainable production and use of environment-friendly goods such as LED lights or electric vehicles to combat climate change. “My city government launched an ambitious goal in reducing emissions by 95 percent by 2030,” said Raymond Johansen, governing mayor of Oslo. “We have divided our efforts in green procurement into three main areas - transport, energy and buildings and resources efficiency.

“Today, more than 30 percent of all new cars sold in Oslo are electric,” he added. “And on our construction site we as a general rule only allow vehicles and construction machinery based on zero emission technology. And Oslo is at the forefront of circular use of available resources like using biowaste to fuel city buses.”

“We reduced emissions in public transportation,” said Solly Msimanga, executive mayor of Tshwane in South Africa. “We procured 10 electric vehicles that are now being used by the city as official vehicles. We have built the headquarters of the city which is a five-star rated green building and for the next coming two years, we want every new public building to receive a minimum 4-star rate on being green. We believe this is the step in the right direction.” In a meeting with Bonn Mayor Ashok Sridharan earlier on Saturday, Seoul Mayor Park emphasized that it is benchmarking Bonn to develop Seoul into an city friendly to international organizations. Bonn is home to some 20 UN bodies and some 150 international nongovernmental organizations. Seoul is currently home to 31 international organizations. It plans to host 50 by 2020.