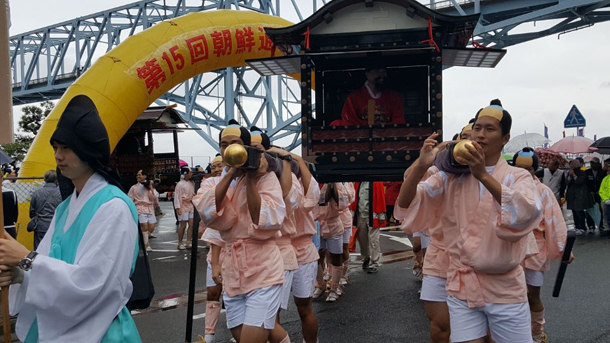 The Joseon Tongsinsa, the diplomatic mission that the Joseon dynasty sent to Japan’s Tokugawa shogunate a total of 12 times, took a long journey. It took more than half a year to travel 4,000 kilometers (2,485 miles) from Seoul to Edo, the old name for Tokyo. The mission was composed of 300 to 500 members. Once they arrived at Tsushima, they were guided and guarded by 1,500 Japanese. The march was spectacular. During the Edo period, when Japan was closed, the Tongsinsa was a window to other cultures. Streets were filled with spectators. In their lodgings, monks, writers and artists communicated by writing.

The shogunate offered warm hospitality, preparing accommodations at 45 locations along the journey. The Ainoshima, a small island with a perimeter of 6 kilometers, was one of these. The mission stayed here 22 times in all, and local authorities rebuilt the facility every time, building 41 structures. They brought in tableware, ingredients and specialties from Osaka and Kyoto. The record-keeper, Shin Yu-han, wrote in Haeyurok, “Records of the Sea Voyage,” that the mission received 300 chickens and 2,000 eggs a day. The cost of one Tongsinsa was equivalent to one year’s budget for a shogunate.

Tongsinsa’s traces can be found in many places. A folding screen with a poem by one of the mission’s members is conserved in Seikenji, Shizuoka. On the way back to Joseon, the writer wrote about his yearning for home and the beauty of Mount Fuji. The poetry of Tongsinsa members had considerable influence in Japan. There are efforts to restore Tongsinsa’s legacy. Setouchi City in Okayama Prefecture established the Kaiyu Cultural Museum in 1992. Named after Haeyurok, the museum exhibits Joseon candlesticks and other relics. In Ainoshima, a head monk at a local temple erected a memorial stone that says, “Making friends with a neighbor with sincerity and trust.” It was the basic diplomatic principle between Joseon and the shogunate.

The 333 documents recording the Joseon Tongsinsa, including Haeyurok and records of hospitality, have been registered on the Unesco Memory of the World list. Korea and Japan jointly applied for the registry as a civilian effort. It is especially meaningful that the symbol of goodwill of the past has been rediscovered and is now seen as a part of the world’s heritage. Korea and Japan are still uncomfortable over Japan’s wartime history, but the Tongsinsa is a reminder of a history of friendship and cooperation that was longer than the history of tragedy.

Since the Moon Jae-in administration came to power, Seoul and Tokyo have agreed to restore shuttle diplomacy between the leaders. But both sides are not actively pursuing it. Korea seems to be conscious of China. The wisdom of our ancestors knew better. For 200 years, Northeast Asia was a corridor of peace and cultural exchange. I’d like to see shuttle diplomacy between Korea and Japan blossom once more.

*The author is Tokyo bureau chief of the JoongAng Ilbo.