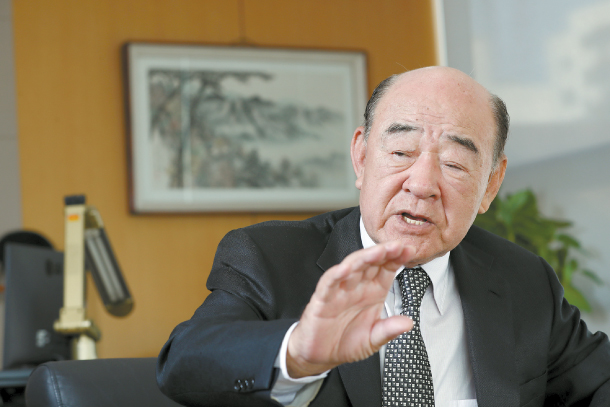 As chairman and founder of KCC I&C, a leading telecommunications equipment manufacturer in Korea, Lee Chu-yong dedicated much of his life to promoting the importance of software.

His journey into information technology began when he went to the United States to study economics. He took an interest in computer programming, and he became the first Korean to join IBM.

Lee returned to Korea in 1963 to lead the Korean branch of IBM. Korea was still poor: per capita gross national product stood at $100 - less than 1 percent of his annual salary of around $12,000.

“I came to realize that the reason we were so poor was that we were not one of leading countries in the first and second industrial revolutions,” he said.

“I believed we should not fall behind in the third industrial revolution.”

Marking the 50th anniversary of the founding of the company, the JoongAng Ilbo sat down with the 82-year-old tech guru at the headquarters of KCC I&C in western Seoul.

Q. What was your biggest achievement over the past 50 years?

A. In 1966, shortly after returning to Korea, I brought in Korea’s first computer called FACOM222 and nurtured talent specializing in computer programming and information technology. In 1975, I took on a nationwide project to computerize the identification information of some 20 million Koreans. I led those tasks in an unfavorable environment because I believed I was helping move the country’s computer industry onto the next level.

Now only a few people understand software. Fewer people grasped the concept of software back then.

Korean society has low levels of trust. People don’t believe things unless they are tangible. And if they don’t have certain knowledge, people tend to disregard matters. The essence of the third industrial revolution was software. I had to argue with scholars because they couldn’t understand that.

How were you able to push ahead with your software business even under challenging circumstances?

I just worked. I worked day and night and on weekends. I stuck to the rule that we should not borrow software technology from Japan. I took pride in that principle.

The idea of the fourth industrial revolution is much talked about in Korea.

You planned to invest 60 billion won ($54 million) in software education.

I was able to make a lot of money because I kept abreast of developments in the third industrial revolution. Now, I want to spend some money on the fourth industrial revolution. I set up a foundation with 10 billion won and plan to spend the remaining 50 billion won establishing a research institute. Still, I feel sad because it is hard to find someone who is willing to devote his whole life to this [information technology and software]. If there is someone like that, I hope to go together.