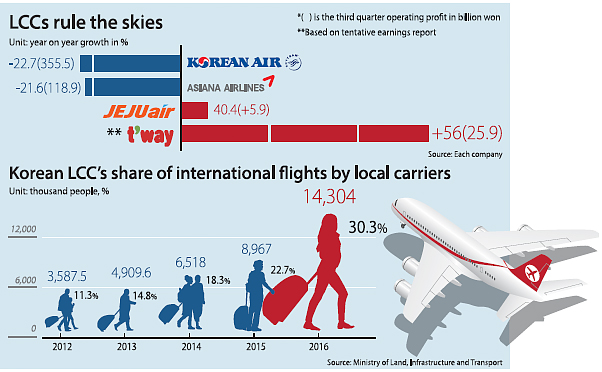 Korea’s largest full-service airline Korean Air announced on Tuesday that it posted 61.6 billion won ($55.24 million) in net profit in the third quarter, falling by a whopping 88 percent year on year. Its operating profit shrank 22.7 percent during the same period to 355.5 billion won while its revenue grew 3.1 percent to 3.21 trillion won.

Asiana Airlines faced similar woes. Its operating profit in the third quarter fell 21.6 percent to 118.9 billion won, largely dragged down by a shortage of demand from the Chinese customers that it is heavily dependent on. Chinese services have accounted for roughly 40 percent of Asiana’s business in the past.

Despite its efforts to strengthen services to Southeast Asian countries, it wasn’t enough to fully compensate for the losses incurred due to the lack of Chinese travelers after geopolitical tensions increased following the Thaad deployment and North Korean nuclear issues, according to Asiana. Korea-China relations have only recently shown signs of improving as President Moon Jae-in and Chinese President Xi Jinping mended ties through the latest presidential summit.

Korean low-cost carriers came up with a very different report card in the fourth quarter, though they were also impacted by the geopolitical tensions.

“We aggressively increased our fleet to capture increasing Korean demand to travel abroad,” a Jeju Air spokesperson said. “Flexible operation on our service routes and expanding supplies to Japan and Southeast Asia also contributed to the positive performance.”

LCCs were less affected by the decline in Chinese customers as they weren’t able to obtain many slots to take off and land at Chinese airports anyway. Accordingly, local LCCs were early in snatching alternative sources of profit by expanding services to Japan and Southeast Asia. Also, an increasing customer preference toward cost-effectiveness beefed up the popularity of LCCs that offer cheaper tickets to shorter-haul destinations.

According to the Ministry of Land, Infrastructure and Transport, local LCCs already carry roughly 60 percent of passengers traveling domestically. Even in carrying passengers to overseas destinations, LCC’s share of the market increased from 11.3 percent in 2012 to 30.3 percent last year.

Korean Air is trying to strengthen longer-haul services by forming a joint-venture with Delta Air Lines.

Still, as LCCs vie to attract more passengers by offering even cheaper deals and expanding international services, full-service carriers are feeling the pressure.