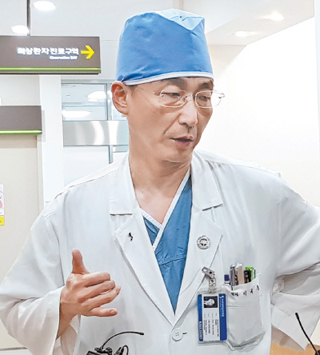 Dr. Lee Guk-jong at Ajou University Hospital on Tuesday explains the condition of the defector. [YONHAP]

More details were released about the harrowing escape of a North Korean defector through the Joint Security Area (JSA) Monday, revealing that he drove to the location in a military vehicle and fellow North Korean soldiers fired around 40 rounds to prevent him from making it to the South.

The defecting soldier sustained at least five gun wounds, including in his stomach and chest area - not merely in his elbow and shoulder as first reported - and is in critical condition.

The United Nations Command (UNC) Tuesday said that the defector pulled up to a point near the military demarcation line (MDL) in the JSA, got out of his vehicle and crossed to the southern side at around 3:15 p.m.

He took cover by a building on the South’s side of the JSA and was retrieved by South Korean and U.S. soldiers around 4 p.m. He was transferred to Ajou University Hospital in Suwon, Gyeonggi, by a UN helicopter.

The UNC said no South Korean or U.S. soldiers were wounded in the skirmish. The defector’s vehicle sped near a North Korean guard post and a wheel hit a ditch, said South Korean Army Col. Roh Jae-cheon, a spokesman of the JCS, in a briefing Tuesday. The North Korean soldier then proceeded to run by foot over the MDL.

Suh Wook, the chief director of operations at the Joint Chiefs of Staff (JCS), told the National Assembly’s Defense Committee on Tuesday that at 3:14 p.m. three North Korean soldiers were spotted through CCTV monitoring running on a path in front of Panmungak, the North Korea building at the JSA, in the direction of its guard post. The three North Korean soldiers and another soldier from their guard post fired some 40 shots at the defector, he said.

When the North Korean soldier was discovered on the South’s side, he was collapsed near bushes and concealed by leaves. The defector was wearing a North Korean People’s Army uniform and was not armed when discovered. There were some discrepancies with the initial report given by the Joint Chiefs of Staff (JCS), including with the timeline.

The JCS initially said that the defector was discovered at 3:31 p.m. around 50 meters (164 feet) south of the MDL near Freedom House with gunshot wounds to his elbow and shoulder. It said he was retrieved at around 3:56 p.m.

When asked at the same parliamentary session if this was the first time North Koreans shot toward the South Korean side of the JSA, South Korean Minister of National Defense Song Young-moo replied, “It was.

“It was an incident that happened in an instant,” Song said. “If the situation continued on, we would have responded accordingly.”

But a JCS official said later that it had not reported to Song that a bullet fell on the southern side of the MDL and that it will be verified later through a UNC probe.

The defecting soldier will need additional operations to deal with his wounds in the future. An initial operation to remove bullets lasted from around 5:30 p.m. to 8 p.m. at the Ajou University Hospital and included an AK-47 bullet, according to a JCS official. This indicates that the North Korean soldiers at the JSA are armed with AK-47 rifles. Such rifles are not allowed in the JSA.

The defector is under the care of Dr. Lee Guk-jong, a trauma specialist at Ajou University Hospital best known for treating Seok Hye-gyun, the captain of the freighter Samho Jewelry, who was shot during a rescue mission after being held by Somali pirates in 2011.