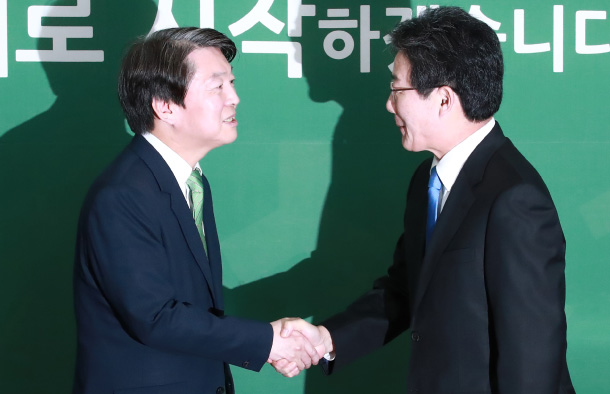 The newly elected chairman of the Bareun Party, Yoo Seong-min, visited Chairman Ahn Cheol-soo of the People’s Party on Tuesday and discussed an alliance ahead of next year’s local elections.

“I hope this meeting will become an opportunity for us to start discussions and start working together as partners of reform,” Ahn told Yoo.

“I want to talk to Ahn,” Yoo said, “about how we can check and criticize the Moon Jae-in administration’s shortcomings and present alternative visions.”

Yoo was elected new chairman of the Bareun Party on Monday in a party convention overshadowed by internal division, mass defections and a subsequently reduced presence in the National Assembly.

Ahn and Yoo also had a five-minute one-on-one talk without any aides to discuss the alliance. They also reportedly discussed the possibility of a later electoral alliance.

“Members of our party have a consensus that we can discuss an electoral alliance for the June local elections,” Ahn later told reporters. “Right now, we will have an alliance to pass bills on budget and reform measures, but a condition will be created naturally through our cooperation to discuss an election alliance.”

Following their meeting, Yoo also told reporters about the idea of an electoral alliance. “Of course, I am open to the possibility. But I was not able to confirm specific plans or the strong will of the People’s Party. I can learn more when we talk more,” he said.

It is not yet known whether the alliance plan will be endorsed by other party members. Senior members of the People’s Party, particularly politicians from the Jeolla region, including Rep. Park Jie-won, are skeptical that an alliance with the conservative Bareun Party will harm the party’s centrist, reformist image.

If Ahn pushes to go ahead with the alliance, veteran politicians from Jeolla may leave the party. It will hold a meeting of its lawmakers next week to decide the course of its future.