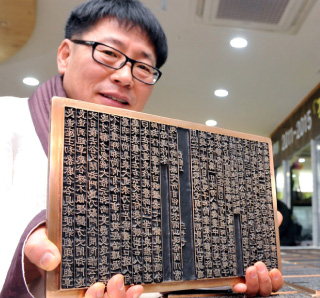 The Unesco Memory of the World website has a section named the “Mow Jikji Prize.” This section makes any Korean proud. “The purpose of the Unesco/Jikji Memory of the World Prize is to commemorate the inscription of the ‘Buljo Jikji Simche Yojeol,’ the oldest existing book of movable metal print in the world, on the Memory of the World Register, and to reward efforts contributing to the preservation and accessibility of documentary heritage as a common heritage of humanity.”

The section explains how the candidates are screened and winners are chosen. The prize was established in 2004 and is given once every two years. Past winners include the National Library of the Czech Republic and the National Archives of Malaysia. The prize awards $30,000.

In 2019, the Unesco International Center for Documentary Heritage (ICDH) will be established in Cheongju, home of Heungdeok Temple, where “Jikji” was printed. The plan was approved at the 39th Unesco general conference in France on Nov. 6. Unesco and the Korean government will sign an agreement for the establishment of the ICDH in February 2018.

The center will oversee preservation and policy research of documentary heritage, maintenance of records and development of educational programs. The ICDH is a category 2 organization of Unesco. Unlike category 1 organizations that are funded by Unesco directly, hosting countries provide funding and human resources for the category 2 organizations. Cheongju will cover the construction cost of 26 billion won ($23.4 million), and the National Archive will provide the operation costs.

There had been various efforts to host the ICDH in Korea. In September 2016, Cheongju asked for the cooperation of Unesco Assistant Director-General Frank La Rue on the establishment of the ICDH when he visited the city for the Jikji Festival. The National Archive submitted a plan to Unesco in March. The biggest contributor was Korea’s documentary heritage. “Jikji” was written by Buddhist monk Baegun (1299-1374), who compiled the teachings of Buddha and great priests, and his pupils published it in 1377-78, prior to Johannes Gutenberg’s 42-Line Bible. Unesco has been maintaining the Memory of the World since 1992, and currently, 426 have been listed. Korea has 16 entries, including the records of Joseon Tongsinsa. Korea has the fourth most entries of any country after Germany’s 23, the United Kingdom’s 22 and Poland’s 17. China has 13 entries and Japan has 7.

Designation of documents of Japanese wartime sex slavery as the Memory of the World, promoted by civil groups of eight countries, including Korea and China, was deferred due to Japan’s aggressive lobbying. While the ICDH does not engage in the selection of the Memory of the World, Korea is expected to have more influence in the overall Unesco operation on documentary heritage.

*The author is a deputy editor of the JoongAng Ilbo.